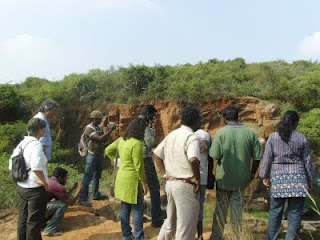 Diwali is only noise and more noise to me. The bonus is the light which glows the streets and the trees. This year Diwali meant something else: Bird-watching in the Nanmangalam Forest Reserve. We started at about 6: 30 am and took the local transport. We were eleven of us and we were all armed with the usual suspects: note-books, pens, binocs and a bottle of water. Along with birds, we saw different-hued butterflies, dragon-flies, locusts, calotes, chameleon and small insects.

Bird-watching is not something one can do on a sudden whimsical note. Though the idea of bird-watching seems very fascinating, it is an exercise which demands patience, quiet and a certain level of interest for spotting birds and identifying their calls. Our group was an assortment of students, professors and others. There were two Germans in our group who provided some interesting comparisons and contrasts with birds found in Germany.

Out of the many sightings today, what remains etched in my memory is the striped keel back (a snake specie) that raised its hood out of water to catch a bird. There were two to three keel backs in the same lake and two of them raised their hood out of water for many seconds. We also admired the many frogs which jumped into the water as if swimmers jumped into their respective laps. The white kingfisher was lovely with black and white feathers. It was very uncomfortable with our presence there and kept flying back and forth in a restless manner. No matter what our intentions, we were intruders.

At the end of the five-hour journey, I emerge as a person who has added some more species to the already existing list in my memory. I hope the entries remain etched. And this entry would remain incomplete if I don't thank Hopeland, an undergraduate student of Zoology, for arranging this session and providing his expertise and time exclusively for us.

You would also like: Arun's write-up on the same session.
Labels: bird-watching, Hopeland, Nanmangalam Forest Reserve, striped keel back
Email ThisBlogThis!Share to TwitterShare to FacebookShare to Pinterest