The Last Waltz - A love letter to an imaginary person

Posted by S. Susan Deborah at 5:55:00 pm
Dear Melody (I always associate you with music!):

You might wonder why I haven't used the epithet 'dearest,' but then I wonder whether we ever gave importance to epithets! December and music always reminds me of you and the songs that you crooned over the phone. Well, it is a surprise to me that we haven't ever met but that does not make any difference, right? What we shared was something special - let us not strive to name it otherwise we might end up being slotted in the labels! We chatted, spoke, were angry over unspoken truths, discussed music and life in the wee hours of the night. Time was at our side. Both of us were lonely in our own ways - our loneliness entwined us into a state of feigned togetherness. We knew it right from the beginning but still we carried on reveling in the present and acting that tomorrow will never come. I enjoyed that NOW which is now in a corner of my memory still unlabeled. The Now was all that we had then - How many nows did we forge our togetherness without having met physically. That green light on G-chat against your name would send ripples through my being and you the rascal that you were, knew it perfectly well. I would like to imagine that the same sensation was yours as well when my name was lit by the green dot! I remember the day you called me for the first time - I think it was on my birthday. As the clock chimed 12, the phone chimed in as well. You sang to me - not the corny Happy Birthday song but another song which I don't remember now. I just remember that I was overwhelmed with happiness and joy. I couldn't sleep after that or did I sleep with a smile - I don't remember but I do remember that I was ecstatic. Why after all these years, I choose you to write a letter. Well, the reasons are obvious, it is you that I remember amongst my many loves. Many have caressed me with words and noble thoughts but none have lent music to my being.

I hope you are well and happy (though I would like to imagine that you pine for me in the deepest of your heart without a visible sigh unbeknownst to the world but I also know that it is a figment of my grand imagination).

So darling, save the last dance for me!

The curiosity that was Perumal Murugan

Posted by S. Susan Deborah at 12:23:00 am
Ever since news of Tamil author Perumal Murugan flashed the internet, I was curious to read and probe as to what provoked the saffron brigade. I finally ordered my copy of One Part Woman and keeping aside The Wind Up Bird Chronicle, I started yet another journey into a different historical time and space. It was soothingly familiar as I identified largely with the local lingo, peculiarities and cultural nuances found in the book. Needless to say, it was a stark contrast to cold, pale and distant Japan. Inspite of having completed a good number of pages, TWUBC  is still to ''wind my spring" (a phrase from Norwegian Wood). 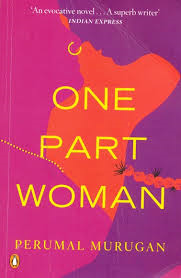 Murugan's story is that of Pona and Kali, a childless couple who are sexually and emotionally quite compatible with each other. They have a strong desire to have a child and not being able to bear one drives them to intense anguish and pain. The story is set in Tiruchengode and in the pages, mention of various temples, deities and other cultural markers are liberally strewn. I completed reading the book rather quickly and to my amazement, I was quite engrossed in the story that I forgot to notice the red signals that might have provoked the touch-me-nots. I tried recollecting portions from the book that created such a furore that made Perumal Murugan swear never to write again. What a waste of talent! I then furiously started hunting Google pages to read up on the various incidents that coloured Tamil Nadu after the release of this book. I finally found that the touch-me-nots were incensed by one practise that Murugan has mentioned in his book. I quote from the blurb for better clarity -

"their hopes come to converge on the chariot festival in the temple of Ardhanareeswara, the half-female god. Everything hinges on the one night when rules are relaxed and consensual union between any man and woman is sanctioned. This night could end the couple's suffering and humiliation. But it will also put their marriage to the ultimate test."


On another note, I am glad that the book was banned, otherwise people like me, though belong to Tamil Nadu would have never heard or read a gem like Perumal Murugan (the angst of not being able to read in Tamil is another story for another post!). I have missed reading another banned book, The Satanic Verses by Salman Rushdie who is another writer who courts controversies much like young models and actresses! Maybe I will soon start a club with the abbreviation BBC (Banned Books Club) and when I do, I will sure put up an invitation for you to join.