Of witches, japnis, power and chakras

Posted by S. Susan Deborah at 2:48:00 pm
They say, 'Don't judge a book by its cover' and yours truly has vehemently given her piece of mind to many who were guilty of the same but alas! yours truly was also guilty of committing that heinous crime. 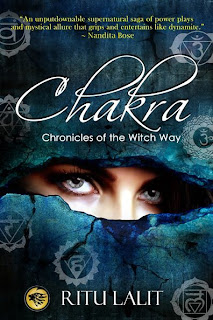 Looking at the cover page of Chakra: Chronicles of the Witch Way, I had naively assumed that this would be another story of mysterious grey eyes and a lovesick man who is haunted by the grey eyes until he finds them, beds them and then finally marries them (here, "them" refers to the grey eyes which is synonymous with the woman who possesses them). And boy, was I pleasantly surprised when I started reading the book and was quite glad that I did  not go by the first impression of the cover page. Now, after having completed reading the book by Ritu Lalit, I can admire the cover page. Mind you, I just looked at the eyes while gazing at the cover page - the other details like the writing on the page was completely out of my vision range. Talk of selective vision!

Another reason I ordered the book is because it is authored by a sharp-witted, wickedly humourous and lovely Facebook friend, Ritu Lalit. I have known her for over a year now and hence was curious to read something written by her. And Chakra happens to be her third book. I can now proudly say that she has not disappointed me. If one has been familiar with the Indian writing trend that has been doled out in recent times, except for some, the majority of writers dish out tales that are often rehashes of the same old sappy romances, rebounds, divorces, coming-of-age and so on. In recent times, except for the Shiva trilogy, one cannot even remember any book that made it to the so called 'Best-seller lists.' And the Shiva trilogy is inspired from the stories of Shiva albeit in a different packaging that appeals to the lay man. No new idea there. In the backdrop of this scenario, Chakra comes across as a refreshing and captivating read. Ritu's writing style which is racy and awesome makes the chronicle compelling and gripping.


Ritu, though digs into the ancient concepts of chakras and kundalinis, packages the entire plot in a modern setting that can be connected to the present scenario. She weaves a tale of witches who live in the normal modern setup and seldom use their powers unless forced to. So the witches here don't fly on broomsticks and have hideous noses as popular tales represent them but are sleek, foul-mouthed, caring, cook and clean and also eke out a living for themselves. In all ways the witches lead perfectly normal lives but within them rest enormous powers - physical as well as mental and so in a heightened state they can mind-read, levitate, move objects, work up a storm and do many other supernatural things. And along with the witches, the story also has men (read wizards but Ritu refrains from calling them so and refers to them as japas) who equal the power of the witches and are jean-sporting, long-haired hunks who possess brawn and brain in ample amounts.


The story revolves around powerful clans who are named after the elements and possess powers according to their elements. What is alluring about the book is that it the chronicles of the Witch way - powerful women who are capable of astounding feats. Most of the children in India grow up listening to stories of magic, gurus, gods, devis and many other supernatural powers. But most of these stories are every male-centric and the role of the woman, though commendable is not often the main focus. Ritu's saga though resembles the stories of yore has powerful women in the central roles and the action revolves around their lives and adventures. Inspite of being crazy and powerful witches, the women characters try to shrewdly defend against attacks from male chauvinistic barbs and acts. It is these points which delight the discerning reader. If the characters weren't witches or japas, they would be people like you and me living their ordinary lives with the burden of everyday routine.


The word 'witch' always has a very negative colouring, as perceived by many. Paulo Coelho's The Witch of Portobello is a book whose theme revolves around the return to goddess religion and energies. Ritu's book also falls along similar lines where the age is of powerful women - The witches. Though the story flows seamlessly, there seems to be many questions at the end of the narrative but thankfully Ritu assures her readers that the book is a trilogy and I let out a sigh of relief as I await the sequel which I hope will answer the questions left unanswered.

Post Script: And one question that was and is still niggling my mind is: How does one become a Witch?

So do you enjoy stories of witches, wizards and magic realism? Who are your favourite authors and can you recommend any specific works?