Posted by S. Susan Deborah at 9:03:00 pm
How long does it take to assess a person? I have read that in five seconds an impression is made. I cannot agree and neither do I agree with the cliched saying, 'First impression is the first impression.' Today I was introduced to someone while going for a walk. As soon as the first introductions were made, I could see the lady scrutinising me from top to bottom. I could sense that she was ass . . . essing me. I felt rather uncomfortable. Could she have gauged me just by looking at me. Did she sense that I was a corny blogger or for that matter that I didn't choose to bathe today?! Maybe not. What did she read of me when she looked at me from top to bottom. At that precise moment when she looked at me, I also judged her or rather ass . . . essed her. We were both doing the same things but I would like to be partial with my observation because it was the observation of an observation. 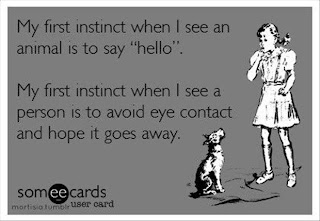 Often we are not open-minded enough to be compassionate and non-judgmental while meeting someone for the first time. Perhaps there is this notion that the other person might be judgmental of us and why not take the first step by judging them harshly and showing that through our facial expression. By experience and a bit of prudence, I have come to realise that first impressions don't mean much. A tough exterior can mask an insecure interior or a seemingly calm exterior might be vicious within. The phrase, 'Be Kind; Everyone You Meet is Fighting a Hard Battle' runs and reruns in mind when I find myself trying to judge a person in the first five seconds of meeting someone. Something related to this is falling in love at first sight. While I can possibly extend my general speculation to love, I will not venture that side because I have strongly felt attractions in the first five seconds of meeting someone. Well, can attraction be equivalent to judging, I don't know. Some things are mysterious and cannot be ascertained but I guess scientists have tried cracking the mystery of love at first sight and maybe they are right.

I think first meetings pave way for opening one's world to someone who is different, unacquainted and new from our world. After subsequent meetings, we can decide whether we want to stay or leave but that first time should be an open-minded one, I reckon. 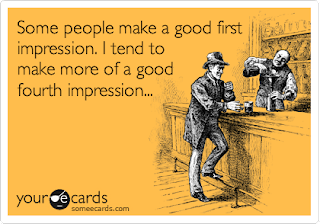 Just because I write this, it doesn't mean that I'm open-minded. I am learning to rein my force of habit and trying to be open to the possibilities of a first meeting which could probably lead to some strong bonds and conversations.

What do you think of this preoccupation with first impressions?