Posted by S. Susan Deborah at 9:42:00 am
I am participating in Write Tribe's Festival of Words from 1st to 7th September where nearly 82 bloggers are writing on the theme of Seven for Seven days - a post a day! Today is Day 2. 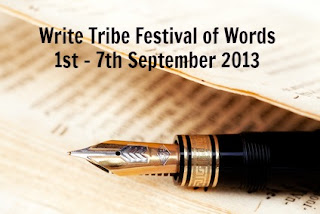 It's quite rare that I mention my dad leave alone writing about him. I think this is the first time I've come close to writing something about him. He passed on when I was thirteen and since then it has been a long while. I have outgrown the memories that we shared but there are some that remain evergreen and those are the ones I am sharing today. Here you go:

1. I remember sitting with him on Saturday afternoons, sipping hot mutton soup made by my amma and listening to Biblical stories. He was the one who started me on with those interesting stories which held me in rapt attention.

2. Going hungry on a certain Sunday afternoon because I was yet to memorise Psalm 23. Eventually I did memorise that passage and till date I remember what I had learnt that day.

3. Going with him to his office and while returning we stood outside a house because we heard one of our favourite songs, 'Oh Lord, my God, when I in awesome wonder' playing in a record inside the house. We stood there till the song got over and then resumed our return journey.

4. Close to his office was a water body which had reeds growing around then borders of the water. Sometimes he brought some of those reeds neatly cut to our home. I would put them into a bottle of water. Those reeds with their deep maroon colour would look beautiful.

5. Being slapped hard when I interrupted him while he was conversing with a neighbour. The reason: We were in the middle of an interesting story-telling session when the neighbour came home. I was quite impatient to listen to the rest of the story and barged during the conversation. The response was a sharp slap. I had learnt what I had to that day!

6. Once when I got very low marks in my Geography exam, my father refused to sign the Report-card. Later he did sign it but left a note along with it with his name signed on that note. It read: "If your marks are like this, I will not sign your Report-card. All the best."

7. I never saw my father enter the kitchen but on those rare occasions when my amma went to visit her parents in Trichy, my dad would prepare delicious food. I still remember the taste of some items that he judiciously attempted to cook.

I must admit that his memories don't come without coercing but the above seven do come effortlessly. Those days were different. It has been 21 years since the day he left us. Life goes on.

It's strange how minds come up with similar topics. Here's Karan who writes at Scribble who has also written a post for his father for the Write Tribe's Festival of Words. Read here.