Pre-meditating the usage of foul language

Posted by S. Susan Deborah at 11:03:00 pm
In today's world, it is almost next to impossible to refrain from using unparliamentary words in every context. We have a Hollywood movie channel, which has subtitles for its films and every time a character uses foul language, we can see four asterisk symbols (****). This is the norm as it is not 'nice' to display four-letter words on the screen while screening the movies for Indian audiences. Fine. But in today's world, usage of these words has almost become a part of the daily parlance. There were times when I used to detest these uncouth words. I strongly resolved not to use these words. I still do but in fits-and-starts. There are some absolute places where the usage cannot be restricted. Let me illustrate. If a man tries to grope in public transports, I cannot pass him off with a mild 'Stupid' or 'Idiot.' I am forced to use expletives not only to convey my anger but also to make him feel small and dirty. Whether I succeed or not, I cannot know but I am left with the small pleasure of having given him a piece of my mind in just FOUR LETTERS in addition to some three or more words. 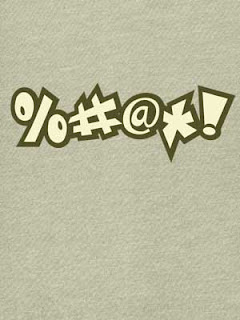 Despite the fact that I use expletives on choice ocassions, I cannot help but detest the usage of these words in every context. Sometimes I wonder about passing off these words as interjections, but no. I believe that the usage of four-letter expletives are something that should be reserved for special occasions. Most words that are part of expletives are sprinkled in every sentence and used as a noun, verb and an adjective. I can understand when out of sheer frustration, someone says: **** but uttering it with every action is taking it a bit too forward.

Today's children use these words to look 'cool' and 'in.' While everyone who uses these words know that they ought not to be using it, few seek to rectify it. I can understand if an old sailor or a man from the army uses foul language a bit too frequently but others.

I always seem to regret the usage of four-letter words after I spew it out in an extreme passionate emotional status. The process continues . . .

Do you believe in clean speech and using words with hygiene? Tell me . . .