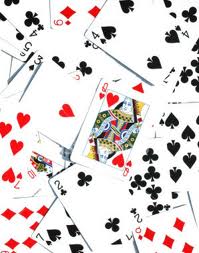 Funny, isn’t it? One can never imagine hearts being black and spades red! Well, this was something I found interesting when I saw the film Interstate 60 while browsing through different channels idly while sitting down to fold some clothes. I just about caught the scene where a man named Ray plays a small game with the protagonist using a pack of cards. He shows him different cards and asks him to name them while he slowly increases the speed of the game. The protagonist identifies the cards but as he is conditioned to think that hearts are always red, he mistakes the red spades for hearts.
Quite true! We are conditioned for almost everything and seldom realise that we are slowly being sucked into the vortex of familiarity and boredom. Sometimes I allow myself willingly into assuming what certain words are by just looking at the first letter. I think that a certain word which starts with ‘e’ is examination when actually it is evaporation. A mental conditioning which sees the ‘e’ in the beginning and ‘tion’ in the end.
Leave alone words, almost everything within us is so conditioned that we seldom venture into the unknown and the unseen. I find that this conditioning can be extended to food as well. One is wired to look for Starbucks, MacDonald’s and many such brands while looking for an eatery that the local and indigenous food is completely wiped out. Sometimes people find familiarity a comfort. It is a saving grace which enables them to stay protected. Why waste time looking for the unknown local joints, let us instead stick to what we know – Subway and Pizza Hut!
Conditioned about colours, brands, words . . . I can go on with this but still some corner of me refuses to let go of the conditioning. I am a 20th century fox, you see!
Picture courtesy: Internet
Labels: conditioning, Interstate 60, life, Normal
Email ThisBlogThis!Share to TwitterShare to FacebookShare to Pinterest