Posted by S. Susan Deborah at 10:23:00 pm
Once upon a time, not so long ago, we were fighting stereotypes and tags attached to a specific gender or group. But now that is gradually becoming passe. Now, we have left stereotypes and are working pretty hard to reverse stereotypes.

Branding a woman with specific colours, chores, views and jobs, though still exist are giving way to something else. People, these days try to defy what is stereotyped about them and work hard to present a 'different' view. Now this is not something 'bad' or 'uncalled for.' But the very idea of defying stereotypes is slowly becoming a compulsive obsession. For example, the colour 'pink' is always seen as a woman's colour. But despite the fact that some women love the colour, they opt for other colours which do not essentially carry the 'feminine' tag! In the process, one is trying to consciously reverse stereotypes.

It is remarkable that in many issues, stereotypes are gradually melting. But I wonder whether going against stereotypes leads one to consciously avoid certain things that one loves and wishes to adhere to. If a woman feels good about getting manicures and pedicures, it does not point to the fact that she is very feminine and loves to pamper herself. Even if she loves to pamper herself, why not. Is it a stereotype that women who admit that they love the beauty parlours are vain and overtly feminine. No. A man may pamper himself by discussing about politics passionately but does that limit politics to men alone? No.

When I look around, I see many women who say: "I don't much like the colour pink, you know. They call it a feminine colour but I prefer black." I have often felt like asking: "Do you like black because it is not a feminine colour or because you genuinely like it?" This is but one example. There are many all around us if we care to look. 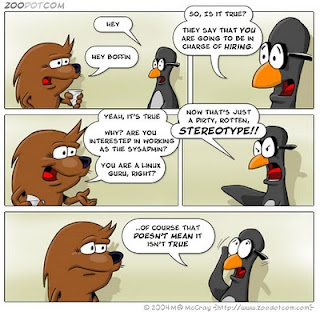