Posted by S. Susan Deborah at 1:39:00 pm
It has been a long time since I have posted something on a book that I have read. Well, the last time I did something like that was in October and the book was Tolkien's eternal favourite The Lord of the Rings. So here I am with a review or rather an observation (many observations) about a recent book I happened to read and also enjoy.

I have always imagined as to how the world would be without women and those thoughts never found any strong base. The imaginations would fizzle off for I could not bring myself to imagine a world without women. But the writer Manjula Padmanabhan has done a brilliant work of creating a fictious world in her novel, Escape, where she describes a place where there are no women, save one. The story belongs to the realm of science-fiction and Padmanabhan has intricately woven her way through gadgets, technology and futuristic weapons. 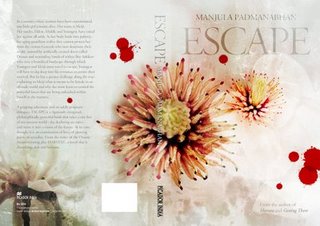 The thought that was born in my imagination about a time when there will be no women was given shape by the writer. In fact, I found a kindred spirit in her thought of basing a story in a land of no women. The only girl in the novel is a young child (later girl) named Meiji who is carefully hidden by three brothers who are called Eldest, Middle and Youngest. The greatest fear of the brothers is that the General, who is like a ruler of the country, would find out about the existence of the girl. The entire story revolves around how the brothers take care of the only surviving girl child and safe-guard her from the General.

I have never read many woman authors who have ventured into science-fiction and hence the discovery of Padmanabhan came as a pleasant surprise. In fact, this is the first sci-fi I am reading that is written by a woman.

Well, the title of the post also mentioned 'Good music' and ever since I have laid my hands on this wonderful music by a Japanese new age instrumental group called S.E.N.S., which stands for Sound, Earth, Nature and Spirit, I return to them whenever I need to escape the reality of the everyday humdrum of life. The piece Be As You Were When We Met always makes me nostalgic for something I have never experienced. I yearn for something and some place to where I have never ever been except in my thoughts. So here is the video:

Well, I hope the good music transported you and Padmabhan's novel intrigued you. I also welcome you to share your favourite music that moves you to tears whenever you hear the same.


The music is dedicated to all my readers who I cherish and savour.