What stuff is humour made of?

Posted by S. Susan Deborah at 5:38:00 pm
Many times, I have wondered, What makes humour or rather What stuff makes humour? What ticks people and why do we laugh at some jokes while finding the others stale and worthless. There was a time when I didn't take very well at those who laughed and laughed. I always assumed that those who laugh all the time are people who can never do anything serious. I despised such people. Now, don't think that I did not enjoy a good laugh. I did. I laughed too but not all the time. As I am growing older, I have realised that laughing is a great thing. Now, even at the slightest pretext, I can laugh with reckless abandon. But what makes humour humour? No, it wasn't a typos. What tingles the mind to laugh away? Across the board, I have observed that humour associated with sexual innuendos are the ones which make people laugh and laugh. Now, when I say sexual innuendos, don't get over-imaginative about explicit scenes. One can even refer to a simple comment which is sexual but in the garb of an innuendo! One needs to be extremely creative and witty when it comes to innuendos. 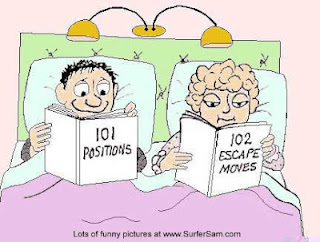 Now, why does sex create so much laughter. IT has to be the last thing that causes laughter as it is something intimate and personal but that's not the case. I guess it's also a universal phenomenon -- every country's citizens bond and laugh over jokes on sexuality. As much as it amazes me, I have to agree that I also seem to laugh at jokes which are aimed at the groin. I wonder why. Of course, there are many topics which provoke laughter but every other topic boils down to sex and sexuality. It is also quite strange because as a country, India has to come a long way in accepting that talking about sex and sexuality is not taboo. Inspite of topics on sex being taboo, jokes on sexuality is not taboo -- right from the naughty aunty who teases the newly married woman to the girl in the fourth grade who laughs when she sees two dogs in heat, everyone seems to enjoy laughing when it comes to intimacy.

The surprise or rather shock factor is doubled when I see the West also enjoying the same topics inspite of sex not being a taboo subject. Many Hollywood movies have men (single and married) enjoying a joke or two while bonding with their friends and sometimes even colleagues. Sometimes spouses also partake in laughter over jokes on sex.

I find it quite amusing and relaxing to find that atleast in jokes we discuss the taboo openly albeit in innuendos!!

Well, laughter is good, no matter how :)

So, what's your take on this?