Why the word ‘simple’ baffles me everytime I hear it

Posted by S. Susan Deborah at 3:14:00 pm
Usually while describing a learned professor, the word which is oft used is ‘simple.’ Sentences like, “He is quite brilliant but very simple,” is something which I hear quite a bit. What exactly does this word mean? Simple, I see, is used in different contexts. For example, “Today I have cooked a simple meal,” “My thoughts are always simple,” “They are very rich, but quite simple,” She has a way of dressing very simple;” I am a simple person with not many ambitions.” Mind boggling, isn’t it? This word has almost seeped into many contexts. 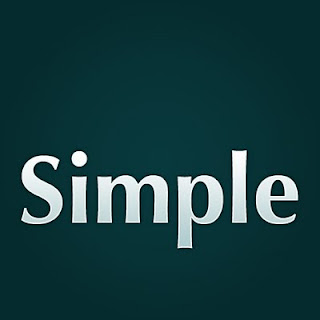 In the context of food, it could mean a preparation without many spices and that which requires less cooking time; in academics, it could mean that in spite of having qualifications which run up to two lines, the individual is not proud; in terms of societal standing, it could mean that in spite of having abundance of wealth, the people live lives devoid of pomp and glory. Well, . . . I have even read blog posts which begin with, “Today’s post is a simple one.”
Now I have a problem with this usage. Take this context, for example:  if a woman has no wealth, but tries to act rich by the way she dresses and talks, she is spurned by many but if people who are rich don’t display their wealth, they are called ‘simple.’ How does one digest that? Does simplicity reveal itself only through the exterior? Just because one does not dress extravagantly or uses less spice, does the individual/object become simple? It has to be something more that, I reckon.
By using the word ‘simple,’ does one categorise people, food, film, character, etc.? Can one word be used to signify different traits? Are we lazy to exploit the other words in the English language and therefore use a single word to describe heterogeneous contexts?
My professor always says: “There are no synonyms in any language. Every word has its own context and cannot be replaced by another.” I think he is right. What do you think?