Too much of a slave to imagination

Posted by S. Susan Deborah at 11:19:00 am
People say that students of literature and the like are given to too much to imagination and fantasies. Well, I won't deny that but at the same time I would also say that it is a sweeping generalisation. One such imagination for me is when I undertake travelling of any kind. Whenever I board a bus/train or flight, I always imagine that I will meet interesting people and have conversations which would stimulate and excite me. Well . . . I guess I imagine and fantasise a bit too much.

Last night, I travelled by train. The passengers who were with me did not even smile at me. I was bit hesitant to make conversation as I thought that all of them did not want to be disturbed. And to top it all, all of them have their mobile phones and laptops to keep them company.

This morning, as I was waiting to get off the train, the man who was with me in the same compartment started talking to me. And we found out that he had gone to the same College as me and also belonged to the same department. Bang, we started . . . but alas! we had very less time. His words still ring clear: "Gosh, I should have spoken to you last night. These days people don't want to be disturbed and so I didn't talk to you." I wish he had spoken. How often we assume so many things but the assumption is not without a grain of truth. People do not want to be disturbed. Gone are the days when travel meant sharing stories, food, addresses and other things. I know of some people who have fallen in love while travelling in trains. These days everyone is in their own world either fidgeting with their mobiles or tapping away in their palm/laptops. 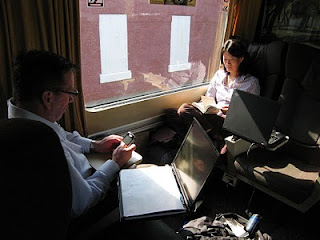 Coming to imagination, as I mentioned earlier, I used to be excited to travel as it involved meeting new people but I guess I should curb that imagination and be practical. But a sliver of hope still runs within me. I shall not give up. Some of my flight journeys also have been quite boring as the fellow passengers don't much talk. They don't even smile. Well, I sometimes think that I have to take off my rose-tinted glasses when it comes to travelling but I will not do it anytime soon.

Travel tales, anyone. What kind of a passenger are you? Do you like to talk or do you prefer being cocooned in your make belief world ignoring the other passengers?