Posted by S. Susan Deborah at 10:08:00 pm
The parent-child relationship can take different hues and turns. But one thing which baffles me is the proclamation of the child saying, "My father/mother is  my best friend." I am never able to get over the fact that parents can be friends of their children. Well, I can understand that the relationship between parent and child can be great and quite affable but friendship is something I cannot reckon with. Well, how can a parent be a friend? Impossible. 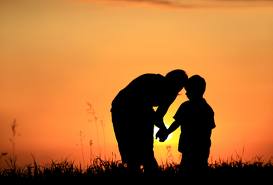 If parents become their children's friends, I can foresee many problems there. Parents, to keep up with the child's lifestyle resort to acting like the child in terms of clothes, language, among other things. I would like my parent to be different from what I am, in terms of language, style and disposition. If my father or mother speaks the language that I speak, using the same slang and other things, it may seem cool but then where is the line that separates us? Generation gap is but natural in a relationship that is apart by ages. I guess that is healthy. The parent can speak of a time that is hitherto unknown to the child.

Every relationship has a specific role to play and though there can be occasional slipping in roles, there cannot be a role-reversal. I would like my parents to be friendly but not my friend. I have read and heard of many parents who want their children to share everything with them. It is quite healthy on some levels but there are some things that cannot be shared. On the other hand, if a parent claims to be a friend, then the parent has to invariably think and share the child's problem as a friend. While some parents find it easy to be a friend when it comes to using language and style, in the areas of problems, the parent has to precariously tread between roles.

After having said all this, I should add an disclaimer that these are my observations and perceptions. I am not yet a parent and so my observations are only hypothetical. But I do think that when I become a parent, I will be a friendly parent to my kid and not a friend. If I become a friend, my child would get a tad confused.

Well, parents and others, sound me on this trend.