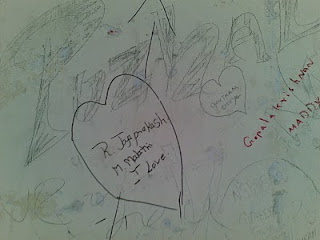 What are your immediate thoughts on seeing this picture? Well, for me its not a very pleasant sight to behold. Graffiti is something which has been in our culture since long. But the graffiti that held its place in history made  political or revolutionary statements that made the general public to think and act (certain times). But as time passed by, graffiti has been reduced to scribbling one's names or just scrawling a heart with two names written.

This kind of crude writing of names just to pass away precious time is quite annoying. We can find this kind of scribbling everywhere - museums, railway stations and in some cases even in buildings which are are given the heritage status by the government.

What is the psychology behind this kind of behaviour. This is seen mainly observed in school and college students who tend to carve their names in trees, walls, rocks, banners and many other places which seem a nice place to etch their names. Solidarity in having a gang, lover and impressive mobile numbers make the students to scribble their names in walls which are clean and just painted. Why? The urge to possess and own a particular place in the wall gives them a rush of adrenaline and excitement. Every year the government spends big money to preserve many of its historical monuments from vandalism without any effect from the public who love to deface clean walls and rocks.

The word 'quiz' which was also born from graffiti is one example which stands apart. I know that many people who scribble on walls do not know about the word 'quiz' or any revolutions that were born out of graffiti. All that they know is that they have time and means to etch their names for posterity (or so they think) much to the annoyance of people who love to see clean walls.


"I think graffiti writing is a way of defining what our generation is like. Excuse the French, we're not a bunch of p---- artists. Traditionally artists have been considered soft and mellow people, a little bit kooky. Maybe we're a little bit more like pirates that way. We defend our territory, whatever space we steal to paint on, we defend it fiercely."
—Sandra "Lady Pink" Fabara (Source: Wikipedia)
So what is your take on Graffiti dear reader?
Labels: experiences, Graffiti, walls
Email ThisBlogThis!Share to TwitterShare to FacebookShare to Pinterest