So we are talking about a certain kind of fetish . . .

Posted by S. Susan Deborah at 12:13:00 pm
Now when I skimmed for Google's expertise on the word 'fetish' it gave me quite a range of meanings and examples. I was not very interested. The word 'fetish' always means to me anything that one gives excessive attention to. Hmmm. Talking about that, I would like to spill forth in words the fetish that has accosted me but registered its presence only now. A fetish for expression of language in the way it is meant to be. Let me be clear about this: An obsession to write words in its full form and an irritating tendency to dislike short forms. Well now this kind of a fetish is not uncommon but in my case I go a step forward and tend to associate this attribute of writing in short forms to the writer itself. 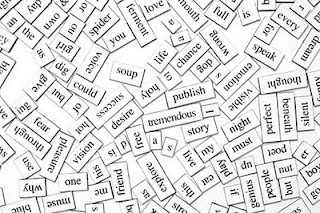 This fetish particularly drives my friends crazy as I insist that they avoid short-forms of any kind. 'U' instead of 'you,' 'k' instead of 'okay,' 'lve' instead of 'love,' etc. I am quite fine with using standard short forms like 'etc,' 'e.g,' but shorter forms of short words is a tad annoying. This holds true with words with an apostrophe. People write the complete word but leave out the apostrophe. Why? It reflects a laziness on their part to place the symbol before a particular letter.

Talking of connecting people's characteristics and their way of writing might be far-fetched but this is what I involuntarily do once I read what they have written. I was not trained to do something like that but then it is something inbuilt. If the person uses short forms, I think: "There is another lazy individual who thinks (s)he will lose time if the entire word is written." After the advent of mobiles, this is the norm. All the words are shortened and most of the times punctuations are given the slip. Let us see a sentence like that:

Were you able to decipher this message. It says: Shall meet by 5 okay. Don't be late.

Some might argue that language is meant for communication and as long as you communicate, it is fine. But a sloppy communication style is no excuse for a well-written effective style of communication. Now I am beginning to think that it all boils down to style. I am adding style and elan to my fetish. The one who uses short-forms excessively is devoid of any style or elan. Period.