The case of the ubiquitous phone charger

Posted by S. Susan Deborah at 11:53:00 am
Now here I go meandering about another pet peeve: The phone charger!!! The innocent looking phone charger is a fixation in almost all the plug-points in our houses. They are found in the living room, bed room and sometimes in the kitchen or the bathroom. It all boils down to the availability of plug points and the individual (the place (s)he was standing when the battery slowly died down) Talking about death and dying, it has become an indispensable part of our vocabulary after the seeping of mobile phones into our lives - "My battery is slowly dying, I shall hang up (another death image), "My phone was dead and so the phone got disconnected." 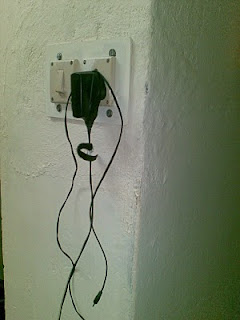 All of us have our specific places to charge the phone. Well and good. But leaving the charger where it was and in some cases, the switch is also left on. Many times I have argued the case of energy saving when one leaves the charger in the point even after its work of charging is long over. The charger has become a sort of urban wall design so much so that people have come to accept it as quite 'normal' to see a charger hanging amidst the choicest of paintings and furniture.

A few months ago I had this fetish of freeing the charger from its points in friend's places. I used to do it as a compulsive action but have given it up now as almost all the house possess this trait. I have restricted this to my own house despite the fact that I get on people's nerves at times (atleast once a day).

Now I know that many of you reading this post also have this habit of leaving your chargers in the points long after your phone is charged OR you may also be like me whose pet peeve is to see the charger hanging clumsily in different points of the house. The last post about graveyards saw me sharing a kindred spirit with many of my fellow blogger-friends but with the case of the ubiquitous phone charger . . .
Labels: fetish, life, mobile phone, phone charger
Email ThisBlogThis!Share to TwitterShare to FacebookShare to Pinterest