At home with those asleep

Posted by S. Susan Deborah at 3:28:00 pm
The day before yesterday saw me and Barbara (an exchange student from the Queens University, Belfast) going and visiting two graveyards and I must say that I immensely enjoyed the experience. I have visited graveyards before but on Friday I spent a lot of time examining tombstones, crosses, names, dates and other aspects. Since Barbara had studied protestant and catholic memorials in Ireland, she had a mine of information on tombs and inscriptions on the tombs.

The atmosphere there was cool and peaceful. We found many dogs lying down quietly on the tombstones. Who were the most serene - the person inside or the dog outside, I could not come to a conclusion. In the midst of the hustle and bustle of the city, there was this graveyard which seemed to possess a distinct personality of its own. The first graveyard was the Garrison Church graveyard near St. Thomas Mount and it has existed right from the 18th century. I could locate the graveyards of many people whom I used to know. Years ago I visited the same graveyard with my then flame and thus Barbara had some interesting tales to listen from me. In a way, my personal history had a remote connection to that graveyard. 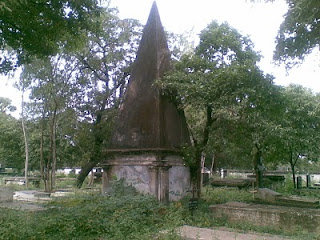 There were old tombstones which looked quite lovely and ancient. The more recent tombstones had pictures of the deceased on them. Some tombstones were very fancy and colourful while some were the usual black, gray and white. One could also differentiate the class of the dead people by looking at their tombstones. Some were quite simple while some were grandiose and shiny. 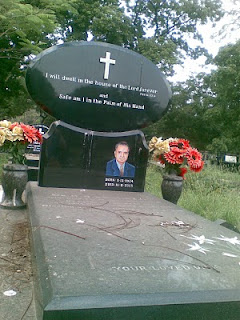 We took a couple of pictures. Barbara also told me that in Ireland one could not step on the graves as they were taboo. It was quite emotional for people and thus the graveyards were taken very good care of but in Chennai we stepped on the grave to take closer pictures and read the inscriptions. It was interesting to listen to Barbara as she identified Catholic and Protestant tombstones by seeing the way the cross was made. There were some graves which was joint together with a tree. These were the old ones. 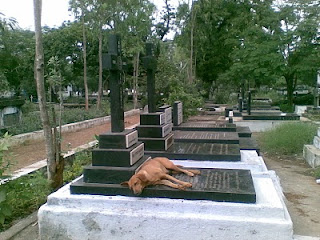 We were quite moved when we saw the graves of babies who were just a few months old when they passed away; families who died on the same day; young people in the age of 20-24. 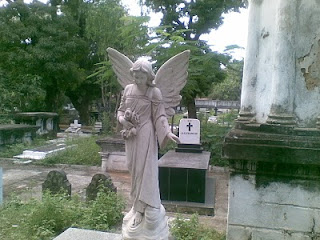 The second graveyard was the British war memorial which was immaculately kept and maintained very well. The tombs were in rows and looked almost wrinkle-free unlike the previous grave. I liked the previous unruly one where the dead, nature and culture existed side-by-side in perfect harmony.

I did not once think about death when I was in the graveyards, which is quite surprising as I always start meandering when I come across such places. I felt calm, peace and a sense of joy being there in the graveyard. I felt at home among those asleep.
Labels: death, graveyards, life, memorial, tombstones
Email ThisBlogThis!Share to TwitterShare to FacebookShare to Pinterest