The recent avalanche of food blogs, pictures of food on Facebook and the delight in exclaiming, "I love to cook" has had me thinking. Decades ago, feminists outcried against the fact that cooking and kitchen were the rightful place for women and during those times, women tried liberating themselves from the kitchen and other labels. But now the woman of today has risen up to the fact that cooking is a skill which she wields quite efficiently. Displaying the various items cooked on social networking sites, lay claim to the attention that she needsfor her rightful skills. 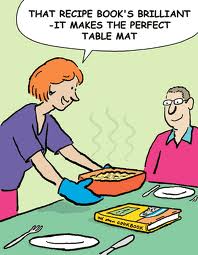 But has this phenomenon reduced woman again to the confines of her kitchen? But if she is enjoying the glory, what is the problem? And, I am also wondering if the media with its glossy cookery shows and glamorous chefs has again pushed the women to the same old place albeit a bit classy in the present day.

All said and done, I enjoy cooking as well as eating but have still not ventured into posting pictures of the food I eat everyday. Perhaps, I will never do it. Why should my private table be set in front of the whole world? Is it to prove that in spite of being a working woman, one can cook delicious stuff by effectively managing time or is it to prove to the world that exotic dishes is not the privelege of a select few or why should Nigella Lawson get all the drools and wows. Well, the whole idea of exhibiting food at social networking sites shouts out to the fact that cooking has once again become something that one should feel proud of.

Though unproven, it is for a fact that the kitchen is the brewing place of many a quarrels between the women of the house, that of the mother-in-law and daughter-in-law reigning supreme amongst the others. And as it has been oft said, 'The way to a man's heart is through the stomach,' it is no doubt that food and exhibiting food is a fashion statement in the present times and for now, it is to stay.