Posted by S. Susan Deborah at 11:20:00 pm
You've heard of the male gaze and perhaps even the female gaze, but have you experienced the driver's gaze. You would've at some point in your life. The gaze could be either out of admiration or out of anger+frustration but the latter seems to be the most common. I don't drive but I do observe drivers, especially my spouse and his various 'looks' if it could be called that way. His admiration gaze is reserved only when a Ferrari or a Jaguar zips past him but rest of the time, I leave it to you to guess/imagine. 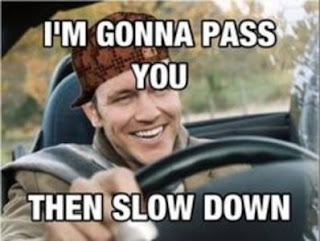 But yes, the driver's gaze is something that all drivers do irrespective of their vehicle's status. I have tried interpreting a few:

The livid gaze: When one is right but the other is wrong, the right one does not indicate it except while gazing at the other driver with a look which if possible, would smoulder the other.

The frustration+livid gaze: When one is running late but the other driver is taking time to either restart after a green signal or does not move fast when the traffic jam is clearing. 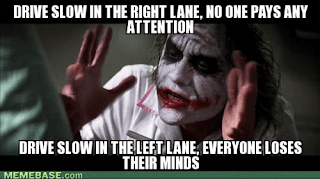 The irritated but quickly turning civil gaze: Reserved for women-drivers. When a male is driving and the opposite vehicle is slow or turning on the wrong indicator, the male driver gets quite irritated but fearing backlash pretends to be civil.

The checking-out (could be male or female gaze) gaze: When drivers of any gender check out people on the road and make it seem quite obvious.

The triumphant gaze: When the driver succeeds in overtaking or securing a parking space when someone else is also eyeing the same. 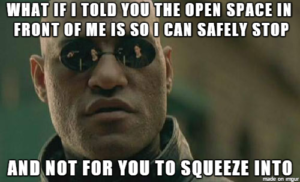 There could be many more but I'm stopping here hoping that most drivers would nod in agreement to the driver's gaze!