The prasad and the Christian

Posted by S. Susan Deborah at 10:10:00 am
Prasad is any offering made to the deity in the Hindu religion. Any festival or visit to the temple is incomplete without offering the god/goddess in question the choicest food, which of course would be later consumed by the people who offered the goodies to the god/goddess. Sometimes, the offerings are made in the temple and the prasad is distributed to the devotees present. Well, I wish it was as simple as that! 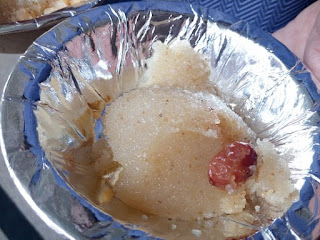 Now, Christianity has the concept of clean and unclean food - unclean foods include any food which has been offered to any idol or deity. This idea of unclean-ness forbids majority of Christians from partaking of the prasad which is kindly offered to them.

When I was growing up in Bombay (now Mumbai), we lived in a colony allotted to staff who worked for the Airports Authority. There were people belonging to different communities and food was also freely distributed. But there was a problem. My parents forbid us to touch any food item that was offered to gods and goddesses from other religions. Obviously we were protestant Christians. My parents were (and still are) quite rigid about anything to do with other gods/goddesses. We being children, we tagged along with our friends to every festivity which was organised by the colony. Ganesh Chaturti was always celebrated with great pomp and splendour. While the celebrations were fun, I used to hate the time when prasad was being distributed - I could neither run away nor eat the offering. I was always in a confused state and did not know how to tackle the issue at hand. I devised a way - I neither wanted to hurt the Hindu by refusing the prasad nor anger my parents by eating the prasad. So, I would receive the prasad and then throw it away into the nearest dust-bin. Such was my fear of god.

We grew up and then food was just food - be it prasad which was offered or biriyani which was shared. It took me a great deal to stop seeing the religious attachments with food. But today around me I see many Christian staff who point blank refuse the prasad. I start to scoff at them, but stop, thinking of my parents.

I still don't accept the prasad when my mother is with me. Luckily, I don't have to do anything because my mother refuses on 'our' behalf.
Labels: Christianity, eating habits, god, goddess, Hinduism, offering, prasad, religion, unclean food
Email ThisBlogThis!Share to TwitterShare to FacebookShare to Pinterest