When Austen turns D for desi 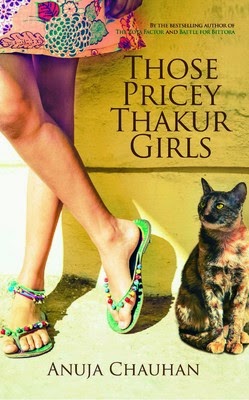 While airport hopping, I happened to pick a copy of Anuja Chauhan's Those Pricey Thakur Girls (2013) and after a few pages was struck by the semblance of the setting to that of Jane Austen's Pride and Prejudice. I tried hard not to compare P & P to TPTG but uncanny similarities between the Bennet girls and the Thakur girls did not allow my racy mind to stop the game of comparison. The pride of Debjani, the leading character of the story though has the pride of Elizabeth is but a pale shadow of the latter and Debjani's beau Dylan is after all a fond memory of Austen's brooding-charming-romantic hero Darcy. The eloping of the third daughter brings memories of Lydia and Wickham and of course the family drama that ensues is a reminiscence of the Bennets and their fancy balls and groom-hunting for their girls. I can understand that when one wants to pen a novel about the family complete with five daughters and extended family hullabaloos, it is difficult to do so without a faint Austenish hue to the entire setting. Chauhan has painted a book which can hop, skip and jump into a Bollywood set and I have even imagined the entire cast of the book. I think Anushka Sharma would make a crackling Debjani while Ranveer Singh would fit well with the lean and butt-sexy Dylan. I must admit that I found the 'butt' fetish of the girls a bit weird considering the fact that not many notice the derriere almost like a person's life depends on it!

The story was quite predictable but that's not what it is all about. How the story twirls and unfurls to lead to the predictable is the art of story telling and Chauhan has managed to deftly spin that tale. The episode of Debjani adding her own lines to the script of the news comes as a pleasant surprise to the reader who has all the while been imagining a trillion twists (thanks to Bollywood) to reach the 'happily ever after' scene which the discerning reader knows will definitely arrive.

Another reason for me to pick the book was one distinguished professor mentioning Chauhan's name after dismissing the entire lot of mushrooming 'writers' in today's India. He highly recommended Anuja Chauhan and asked us to pick up her books before casting a judgement on all the writers of today. Piqued by curiosity after hearing the Professor and seeing pictures of TPTG splashed liberally on my Facebook news-feed, I ventured to try this book. Quite a breezy and light read considering the fact that I completed the reading in a few hours short of twenty-four. This is the first of Chauhan for me and I would like to read what she had written before TPTG. And, for a person who has given memorable taglines such as "Yeh Diil Maange More" (The heart asks for more) and the lovable tune, "Oye Bubbly, Oh Oye Bubbly," Chauhan does have a penchant for words and phrases.

Yes, the desi Austen has conjured memories, stories and unforgettable characters with Those Pricey Thakur Girls.