Lizard in my potty

Posted by S. Susan Deborah at 11:49:00 am
It's one of those days when my urge to pee is rather urgent and I practically dance and run and make it to the toilet and rush to make myself comfortable when I spot a tail . . . I can understand that I eulogized the house lizard to mean home but the tail sends me into spasms err . . . convulsions of horror. Though the meek lizard does not scare me or sends me freaking out, the thought of sitting on the potty with the fear of the lizard springing up into my . . . is rather scary. Well, thankfully, we have another toilet and I quickly made my way there. I was back twice or thrice to see whether the poor fellow had made it outside the WC but to my utter dismay, he or she was still there almost forlorn (my interpretation) and sad. 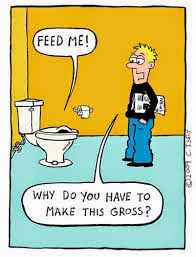 This incident led mt to wonder on many similar aspects of life. We take so many things for granted and expect it to be the same always. Come on who thought that a lizard, of all places would land into a WC and shoo me into the neighbouring toilet. I shudder to think what I would have done if there was no alternative to this. I was able to pee because our home had another toilet. If not, would I have used the lizard-in-the-potty toilet? Would I have overcome my fear and let go of the creepy feeling to attend my urgent call of nature? Would I have played brave? It's easy for me to philosophize over a post but still the thought niggles me and I am unable to stop the rush of possibilities.  Well, I could have always sat down and let the stream of water flow out. Well, what if I had to shit and there was no other option but to sit on that lizard-inhabited-potty? My mind also thought of the hundreds of people who squat on open spaces with the risk of being bitten by scorpions, snakes and women especially who are prone to many untoward incidents while going out to relieve themselves.

Some questions remain as questions alone. I guess I am chicken to even think of the options. I always play safe, you see.