Posted by S. Susan Deborah at 7:06:00 pm
When you happen to go to God's own country, you would hear people placing an order for tea/coffee add a word to the waiter - 'Without.' To someone unfamiliar, the 'without' might sound strange but those who have been living there for a while or have relatives there know that the word, 'without' stands for 'without sugar' and extending the without to a metaphorical level - devoid of the sweetness that has left their lives some time ago. It is a well known fact that Kerala has often been cited at the Diabetes capital of India and having been there, I have seen the great mutualism that exists between sugar and people in Kerala. They are either having tea "without" sugar or talking about their history of sugarless lives.

Recently while participating in a programme organised by Malayalees in Goa, I was quite amused that while serving tea, there were two trays of teas - With and Without. The two W words (I'll call them W Words to add an extra zing to the state of having or not having sugar) are somehow like code-words that bear special reference to those who know the connotation. Now to hear words such as With or Without outside of Kerala was definitely sounding a bit out of context for me but needless to say, where there are Keralites, the W words always hold good.

But what surprises me is the fact that Kerala does not have many sweet dishes, which I think may lead to diabetes but I would be naive to come to that conclusion, I reckon. There are studies which say that one can get diabetes by virtue of being born in Kerala. Well, I'm not here to discuss the disease per say but the various quirky aspects of the D disease. By now you would've realised my penchant for code words ;)

One can start a conversation based on the sugarless state in God's own country. I find it pretty amusing that a state can be called a country. Whoever christened Kerala as 'God's own country' should have been on a high sloshing in local toddy and hence mistook a state for a country, me thinks. If only people in Kerala had struck to drinking local toddy instead of the great coloniser tea, then perhaps the W word syndrome could've been possibly averted. You know one should always stick to local brews instead of exotic ones. 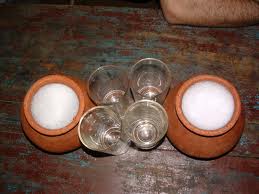 And the W words hold good not only for tea but for juices as well. And, in every meeting/gathering, the serving tray will have at least two or three 'without' glasses which are for people with the D disease. And, no matter what, no food item can be taken out of a person's food habits. He/she will continue having that glass of tea/juice/milk/coffee albeit without sugar. Why not leave the habit of having tea altogether - That is never possible. You can take the sugar out of the Malayalee's tea but not the Tea!

Thus the saga of With or Without continues . . .

Labels: Cup of Tea, Diabetes, everyday life, food, Kerala, sugarless, with or without
Email ThisBlogThis!Share to TwitterShare to FacebookShare to Pinterest