Posted by S. Susan Deborah at 10:22:00 am
It's not an exaggeration if I proclaim myself as an Airport's child. I was born in an Airport colony with the sound of aeroplanes taking off and landing and my amma pointing out to the skies and feeding me mashed rice and potatoes. I was never a fussy eater says amma and obviously when one is shown the skies for small electronic birds, one would be awed beyond one's senses and something as trivial as food would become an enjoyable exercise. I grew up in another Airport colony looking at planes high above and loving the twinkling lights that were often mistaken for stars. Inspite of having lived and laughed in Airport colonies, I never had the experience of travelling in an airplane until recently. Aeroplanes and travel belonged to the rich and affluent but not for middle-class citizens like our family. The urge to look down on the earth was a very strong one and why not. After all the words, 'Airport' and 'flights' were common parlance in our house, our neighbour's house and everyone with whom we socialised and prayed. 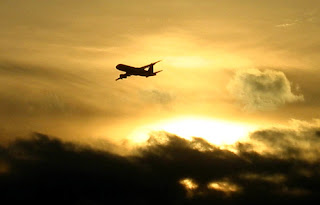 So, sitting inside of an airplane was an eternal dream. When airplanes were shown on the Telly, I watched greedily and travelled in a fantasy flight to a land that was as fantastic as they showed in the pictures. When someone asked, what's you favourite dream, we would be quick to answer: To sit in an airplane and fly away. It seemed magical to think that one day we would have lots of money to be able to fly in an airplane. Friends whose parents were businessmen had the privilege of travelling to exotic locations like Hong Kong and Sri Lanka. We would be quite happy to listen to their stories while at the same time wishing that our parents could also afford such trips. The dreams soaked us so much that we soon grew up, fell in love and forgot all about planes. What mattered was the object of our affections and infatuations.

And then one day, I was given the wonderful opportunity to go to Belfast, N. Ireland as an exchange student. More than going to Belfast, I was eager to fly in an airplane. I was 29. For 28 years, being an Airport's child, I had never flown. When the plane took off from Chennai's Airport, tears fell down my cheeks. I was overwhelmed and speechless that I didn't even feel the need to wipe the tears off. I let them fall. My first flight was to the UK and a long distance flight. After that first flight, I've had many opportunities to fly and every time the flight takes off (the best feeling), I remember the urge that I used to have in my childhood to fly in an airplane.

I believe I can Fly - R. Kelly

These days it's not a big deal to fly. Everyone flies - children, young adults, old people and when I see them, I wonder about those days when we were children and waited for 28 long years before I could fly away.

My grandfather is almost 85 and has worked in the Airport all his life until his retirement. He hasn't flown. I doubt whether he will ever be able to fly as he is bed-ridden and frail. I wonder whether he also had the same dream when he was in close proximity to a plane but never had the opportunity to fly in one.

And the cherry on the cake is that even today I live next to an Airport and every day my ear drums take a toll as the jets from the naval base fly in and around our campus practicing various moves. When my husband and I sight a plane far off in the skies, we play a game of predicting what airline would the approaching flight belong to. It is a thrilling game to look up above and keep looking till the airplane flies beyond us. We smile at our attempts and soon there is another plane approaching. We continue our guessing game . . .