Posted by S. Susan Deborah at 11:22:00 am
While praying, meditating or trying to concentrate, it is essential that the mind should be freed of clutter in the form of stray thoughts. Better said than done! Often while meditating, there is this one thought that I find so very difficult to let go.

When he strummed the guitar and sang that song, my heart leaped and all that I could manage was a smile. I wished that he could go on and on but then he stopped, looked into my eye and asked me to hum along with him which I couldn't do . . .

The thought doesn't stop. I coerce and beg and try all possible techniques, the thought remains so and starts weaving delicious notes that seduces me over and over.

The song was 'Alberta Alberta' by Eric Clapton. He sang and sang on and here I was breathless and dreamy . . .

Ah, I need to focus on my meditation. Another technique is: Let the thought have its way. But then, will the thought ever stop?

The song has some wonderful lines such as, "Aint had no loving/ Since you've been gone." Well, it was Eric Clapton's voice but your face and your guitar that you purchased with your own money and not your father's.

While praying, the heart and mind are supposed to be in a state of meditating over the words that are heard. I remember a scene from the film, Eternal Sunshine of the Spotless Mind where Jim Carrey does not want to erase some of the happier moments he spent with Kate Winslet and wants to preserve at least one memory. He does not want to let go. Similarly, I struggle hard to let go of that one thought in the form of someone's voice or tone and I try to cling on or rather it clings on to me, threatening to sabotage my prayer and meditation. I plead with the thought to release me. 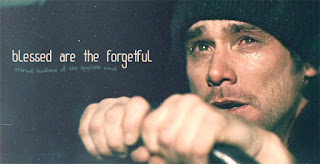 I might have exaggerated a bit but thoughts are like wild horses, which can sometimes be quite hard to tame and if you are someone like me whose memories often surface with just a tune/glance/smell, then it's harder. Inspite of all that, I like praying and meditating.

Tell me about how thoughts play havoc with you when you try to concentrate.