Thoughts on the concept of 'weekend' 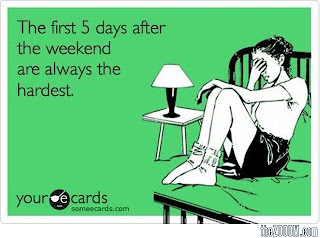 I can bet that the early man had no concept of weekday and weekend. I reckon that it's a fairly recent phenomenon. Even when I was a student at school and college, there was nothing like a 'weekend.' My guess is that the trend of the weekend was largely made popular by the American working ethics where five days are devoted to only work and a two day break which is usually a Saturday and Sunday. I can even go ahead and say that Sunday was the usual day of rest or Sabbath as it says in the Bible and the western system being Christian added a Saturday to the Sunday and christened it as the 'weekend.' With the onslaught of MNCs in India, everyone has adapted to the concept of the weekend rather effortlessly.

Now, what surprises me is that the weekday/weekend concept seems appropriate for people who work and   require respite from their work, hence a two day break to cool their heels. But every age bracket seems to have appropriated the 'weekend' phrase that the word has become pretty ubiquitous. Once Thursday dawns, the familiar, 'So, what plans for the weekend' starts making the rounds not only in offices but even schools, colleges, universities, supermarkets and other places. What is amusing is that even students in the hostel await their weekends as if they have slogged their a#$% off in the week. I understand that students also work hard but their work and the work done by a professional are quite different. The student has nothing else but studies peppered along with some love stories, games and hobbies. This student who has not a care in the world looks forward to the weekend! Ha. 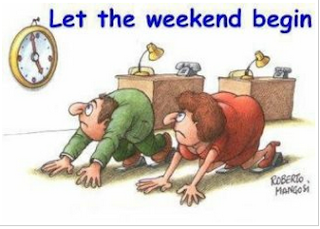 Every Facebook page that carries adverts starts the 'Weekend is here, what are your plans' slogan and one is rather stifled as to what to do with the weekend. For some, like me, who never really differentiated the weekday and weekend, messages which end with 'weekend' are viewed quite suspiciously. Yesterday atleast three individuals wished me "Have a happy weekend" or "What plans for the weekend?" as if the weekend is what I have been waiting for. Maybe weekends do matter to hard-working individuals who look forward to the Saturdays and Sundays, but not me! The weekend concept has become so very compulsory that some poor individuals who work on a Saturday and Sunday are made to look very very sorry since they literally 'don't have the weekend!' Now, how can anyone not have the weekend! Funny, right. A weekend is common for everyone but not working in the weekends is not common for everyone. The so-called weekend people seem to possess a frenzy of somehow making the weekend interesting. If anyone says, 'I will remain home and enjoy some rest and television,' the weekend (not to be confused with weakened) person says, 'Why are you wasting your weekend?' as if the weekend is a commodity! Duh. One looks forward to the weekend but when finally the week actually ends, there is the question of not wasting it!

Sometimes, I have also wished my friends and readers a happy weekend but hence forth, I would rather say, Enjoy your day.

So, dear reader, are your weekends 'happy and not wasted?' How do you view this concept of weekends?