Contemplations on Flatulence aka fart

Posted by S. Susan Deborah at 1:07:00 pm
Human beings have different interesting dimensions to them. One of them is the way an individual responds/reacts to sounds. One such sound is that of the fart. It is a natural process in which a person releases intestinal gas. Well, a process as harmless as a fart is something that evokes different responses from people. I have always been interested in these expressions that always remain unnoticed and unspoken.

Kids, especially, are quite thrilled when they hear the sound of a fart. They don't see any strings attached to the sound and the smell. Things like etiquette, politeness and formality does not matter to them but they do realise that the one who releases gas is an object of fun. One has to be careful for the kids harmlessly rattle away the statistics of the sound giving importance to the after-effects of the same.

I have seen (and heard) older people who don't restrict themselves when they have the need to release gas. They do so effortlessly without any reaction. As kids, we tried hard to supress our laughter when we heard a fart. But why does a simple act of releasing gas evoke so much laughter and fun. Is it the sound or the smell or the fact that the sound is released from a very unlikely place. Why is it that a burp and a hiccup is not seen as funny as a fart or a snore? On that note, farts and snores are the most laughed at sounds made by the human. 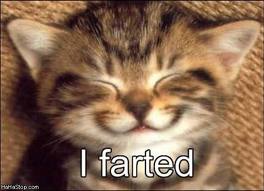 And how did a fart get into the notes for etiquette. Why is it not proper to fart in public? If one can sneeze and cough, why not fart? Especially with women, farting is a vice with a capital V. A fart by a woman is worthy enough to be the fodder for gossip. Why? I don't understand this fascination with farting. Just ignore and carry on. Why does one need to supress sniggers, look away and pretend to keep a straight face.

And to add to the facts and figures, we have farts that are common to a specific community and as all tall tales begin, this one begines like this: You know people from x community are always farting, no matter where and when. Who thought culture would intervene here. Maybe, it's the food habits of a specific community.

I don't know what more to think and say. You tell me.