"I feel as if I was inside a song"

Posted by S. Susan Deborah at 10:03:00 am
If you've read The Lord of the Rings, Book I, then you would remember the lines that make the title of this post. Sam utters the line to Frodo, after listening to a song. After much thought, I realised that there are some songs which leave you much with the same thought: "I feel as if I was inside a song, if you take my meaning." Some deep baritone voices have this effect on me. I can almost picture myself within the song and after the song is long over, the trance remains.

The genre of the song does not matter for this experience. The song could be a spiritual or a romantic love rendition. Whenever I hear Denver crooning You fill up my senses . . ., I always find myself inside the song, almost feeling Denver singing to me and telling Like a walk in the rain . . . The same feeling happens when Presley croons, Wise men say, only fools rush in . . . 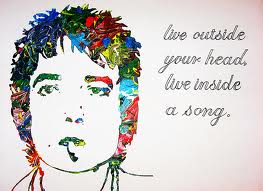 I wonder what gives this feeling? Is it the voice of the singer or an experience or the effect of the lyrics. The song, voice and lyrics envelops the being and one is transported into a different time and environment. Sometimes film songs do this as well. Probably that is why many Indian films have songs to describe a particular emotion. When love happens, the girl and the boy are transported into a place where the scenery is lovely and both break out into a song filled with thoughts of love, longing and desire. And laymen, who fall in love, take refuge in those songs, imagining themselves instead of the actors. Like Sam, common people get "inside" the song.

I am sure that many songs also have the same effect on you. They pull you such that you find yourself inside a song. Have you felt the same way as me?