SHIT!!! Yes, you read it right

Posted by S. Susan Deborah at 10:52:00 am
A month ago, our University inaugurated its first Film Club named 24. We invited director R. P. Amudhan and also screened three of his films, out of which one was titled SHIT. And, in case you are thinking of the swear word, please change gear as the film is about the literal shit. The film carried a social message on manual scavengers in a place called Madurai in Southern India. The camera follows a woman, Mariamma, who cleans the shit of people in a street adjacent to a temple in Madurai. In a country where people don't even use the left hand for any thing except for cleaning shit, here was this woman whose occupation was only cleaning shit with both her hands. In spite of herself feeling disgusted, she carried on the job as it was her source of income. A country which is seen as a developing one still has pockets as these which speak of parallel histories, a far cry from the "developing" status quo.

I must admit that I could not bring myself to watch the film closely. I was appalled, disturbed and felt disgusted seeing the visuals in the film. The director had used close-ups and the camera followed the lady as she was cleaning shit. The film was in complete realistic mode and believe me, there was no trace of any neo-realistic mode. I think you can imagine what was shown on the screen. Shit, in its raw form, could not be seen by me. This documentary brought several questions to me: Does art create a nauseous feeling? Can art be so brutal on my senses (esp. the visual)? Why couldn't I watch the documentary, after all, it's human waste?

Later, in the discussion, the film-maker revealed that one of his objectives in making the film was to disturb the viewer, and he did succeed.

Another film by the director was on the happenings at a crematorium which showed dead bodies being buried and cremated. While the images of dead bodies did not create any nauseous feeling within me, shit did. I thought that I am quite comfortable with death rather than shit!!! And, many like me, agreed that death was more aesthetically pleasant.

I'm not one for scatology, as art or anything else. But I must say that when I saw the woman manual scavenger cleaning up after everyone had finished their business, made me wonder about my disgust. I am still left confused and disturbed. 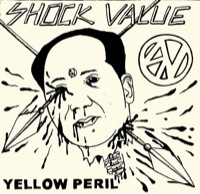 I am not providing the link or any material on the documentary SHIT but if you are interested, you could google the name of the documentary and watch the trailer. A complete version of the film is not available on the internet.

I would like to know what is art to you? Would you be fine in watching literal shit on screen and off screen? Maybe you could tell me.