The last farewell - Meanderings on the Japanese film "Departures"

Posted by S. Susan Deborah at 7:45:00 pm
Staying at home, I am quite privileged to watch many wonderful movies of different cultures in World Movies channel. Two days ago, as I was accidentally changing channels, my hand paused when I saw a very solemn scene on World Movies. It was a scene from a Japanese film titled Departures. I must say that I enjoy watching movies from China, Japan and Korea. They are slow, calming and the music is something that long remains after the film is over. The films are always subtle and gentle. Well, that is for another post. Now coming back to Departures. 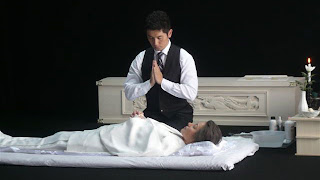 The protagonist is a cellist and after losing his job becomes a professional in assisting departures (death). The customs and rituals associated with death in the Japanese culture were so very solemn and graceful that death did not seem morbid at all. The protagonist's work was to clean, dress and make the body presentable. He does his work very well and as he goes about the process, he learns to love his job.

Death in various cultures has never ceased to interest me. This was the first time I was seeing the Japanese rituals of the dead. The respect given to the lifeless body is something quite touching. Perhaps the belief that death is not an end but only a passage to another life is demonstrated through the solemn rituals and ceremonies.

I don't know whether there really exist professionals who assist death in Japan. But if there are, I would like to talk to them and ask many questions.

What are your thoughts on movies of different cultures and professionals in assisting departures?

Are there any special rituals for death in your part of the world?