Sheepish, in awe and the after effects

Posted by S. Susan Deborah at 6:30:00 am
Have you read a poet's works as a student and then taught the same poet's works to your students AND then met him?

Well, I have done all the three and believe me, it's one memorable experience.

The first time I heard that there was going to be an exchange program to Northern Ireland, the only name that appeared in my mind was SEAMUS HEANEY. Do you know him? Have you read his works?

Today I met him at a book launch. Another being took control of me. That being was awed, acted foolish and felt almost in a dream-like state. The reason: SEAMUS HEANEY.

I have never seen myself go ga-ga like this. Being quite pragmatic and acknowledging any form of celebrity worshipping as nonsense, I could not fathom my behaviour.

I took a photograph with him, got his autograph and came home drunk with the joy of having seen him. Then a million arrows of pragmatism confronted me. I was lost. I was reciting his poems to him. He smiled. I could not answer coherently to his questions. Lost. Standing next to a Nobel Prize winner does not happen everyday. 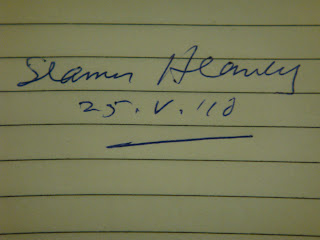