Posted by S. Susan Deborah at 2:37:00 am
Today when we visited the Ulster Folk and Transport Museum, there was a section where smells from days of yore were kept in a box for us to sniff. For me it was something incredible. I had never seen something like that before. This prompted a discussion with my friends. The topic: The power of smell.

My friend expressed how viewing a film in a theatre has involvement of all the senses except the smell. Well, it is true that smell is something which is not quite prominent while discussing the senses. For me it's one of the most sensuous and delicate.

Smell is related to memory and nostalgia. Many a times, a whiff of a once familiar smell sends me off to a past when I experienced that particular smell. The smell of earth during/after rains always makes me feel a sense of longing. Sometimes it's only longing and it is not connected with any person or object. The smell of new books while flipping the pages for the first time is heavenly. I am a staunch smell-person, by Jove!

I often wonder about the loss of this sense. I can't even imagine. I remember seeing a documentary in BBC years ago about a man who had lost his sense of smell. He was telling the audience of how his memory was totally gone. He was lamenting about not being able to smell his morning coffee, freshly baked bread and the perfume on his wife. That struck a chord within me. What would I do without smell.

Amorous conversation is incomplete without the line: I love the smell of you (skin, hair, breath, clothes). I can go on and on about the smell of a beloved. It's magic.

Cooking, cleaning, bathing, walking, etc -- all these activities have some sense of smell associated with them.

Long ago, I saw a 2006 released French film Perfume: The story of a Murderer. It was an evocative one where the protagonist has a strong olfactory sense. He kills many women in the process of extracting their smell. I think it's a lovely film whose protagonist is not Jean-Baptiste Grenouille but the olfactory sense!! 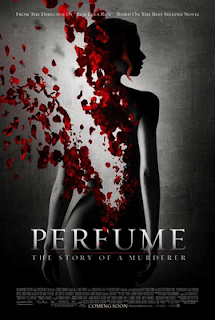 I wish you could smell the ambience of my room while reading this post but then . . .