If not for memories, what would I do

Posted by S. Susan Deborah at 8:00:00 pm
"Let's go to Palimar, I so feel like having an apple shake" -- Well, these lines have stood frozen in the crevices of our memory as we can utter them no longer. Opposite to our College, there were rows of shops which are hangouts for many students like us. A last minute photocopy before the exams would see us rushing to Akash Xerox. Akash was known for offering good photocopies at reasonable prices. I have photocopied countless number of an assortment of materials from him. Opposite to our College was the famous hangout Palimar which offered us lovely milkshakes and short eats. In Palimar, if we ordered one shake, we would be given two large mugs of milk shakes and we would be absolutely delighted. Many hot discussions, proposals of love, first meetings, last partings, after-exam treats, idling away when time was plenty and sometimes reading took place in that small juice bar. Then there was a small recharge shop which we ran to recharge our phones just before getting into the railway station.

But now alas! all this remains only in our memories. 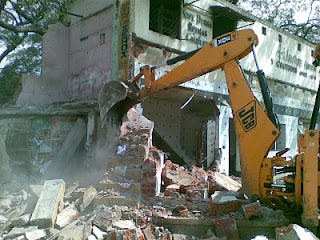 Every time some building that we have frequented is demolished or closed down, a part of us also is crushed. Yesterday morning while my friend and I were walking towards our College, we found to our utter dismay that all these joints were razed down to the ground. Those buildings were an extension of our College for us as for every thing we crossed the road and let ourselves get lost in those shops. 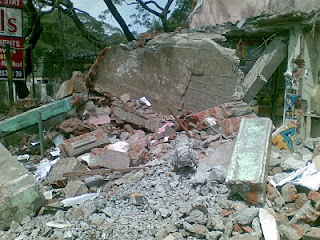 The rubble and dust were like a part of our sensibilities being lost and forgotten. In a recent post of mine, I marvelled at the amazing quality of memory and art and today it is this memory which enables me to cherish those lovely days when those buildings were places with meaning and not just rubble and dust.

They say that the shops were demolished because a highway is to be built but then . . . highways to where??
Labels: life, memories, nostalgia
Email ThisBlogThis!Share to TwitterShare to FacebookShare to Pinterest