Have you ever looked at this blog's side-bar

Posted by S. Susan Deborah at 11:59:00 am
Chances are that many might not have perused the side-bar no matter how inviting the contents seem. The blog-post is a very attention-seeking entity that somehow manages to grab and seduce all the eyes on itself (I thought of giving the blog-post a sex but refrained from doing so. Ah! the ramifications of gender are a bit stifling for me). Therefore it comes as no surprise when the question of peering into the side-bar is raised. For sometime now, my side-bar has been housing a lovely love-lyric which I don't know how many have noticed. My early days of blogging had this poem as a post but then those days I had no readers and so the beautiful lyric went unnoticed as the flowers that grow by the road-side when we take a walk (again I am sure that everyone notices the flowers except a few. Pardon the simile). So I thought I will again put that poem (translated from Tamil to English by A. K. Ramanujan) on today and for a few minutes give you the pleasure of reading those lines and getting lost in their simplicity. 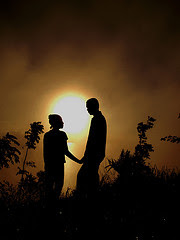 This love-lyric is part of the Sangam era in Tamil Literature. There were many poets who wrote the poems but none were known by their names. They signed the poem with a line from the poem. So the poet who wrote the above lines was known as the poet of Red Earth and Pouring Rain. This tradition absolutely amazes me as the poets during that age did not want any attention and thus remained being anonymous. The poems of a particular landscape consist of elements that are found in their region thus making its appeal very local and unique.

The ancient Tamils also divided their landscapes into five major regions namely kurinchi (the mountains), mullai (the pastoral), palai (the desert), marutham (the riverine plains) and neythal (the seacoast). Each landscape was associated with a phase in love. The poem above is from the kurinchi landscape and exemplifies love in union.

The ancient Tamil system of connecting their landscape and the emotional patterns in love is a convention that has led many modern poets to write similar poems.

Hope you enjoyed reading the poem. Ask me for more . . .