Coming of age with the Lipstick

Posted by S. Susan Deborah at 11:15:00 pm
My Facebook newsfeed is punctuated with different articles and posts condemning the recent censorship of the film with an intriguing title, Lipstick Under My Burkha. Right from the time this film was announced, I was awaiting the release of this one and much to my and my fellow cine-goers' dismay, the news of CFBC hit us hard. It stars some of my favourite actors and of course lipstick as a metaphor for desires, secret dreams and oodles of passion.

I could immediately connect to the title of the film especially the lipstick because lipstick is not just another cosmetic application which makes one feel good and sexy (if you please. Pardon the indulgence). I remember that while growing up, lipstick was something which was used during the annual day programmes. We needed to look our best and a bright pink lipstick which of course, only one used for all, became our most awaited part of dressing up. I used to like those lipsticks and often times annual day became important because of the whole make-up. That time lipstick was reserved for that one special day. Lipsticks were also laced with a quality of the forbidden -- I have heard my relatives mention, "Only women of lose moral character wear lipstick and walk around;" "Lipstick calls for attention when you walk down the road;" "Lipstick makes you stand out in the crowd and hence you become an easy target for men." And of course, lipstick was a forbidden fruit which will ruin me if I apply it on my lips! 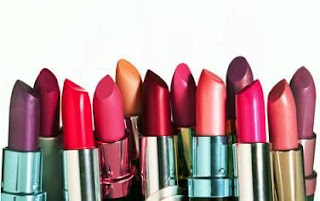 Then came College where lipstick was seen as a class-specific item. Rich kids wore lipsticks whereas we middle-class 'simple' students pretended that wearing lipsticks means that the girls were rich, spoilt and usually dumb. Lipstick was never seen a tool for enhancing one's beauty which in turn will make one feel 'good.' My friend who belonged to an upper middle-class family regularly wore lipsticks and as it is usual with friends of that age, I started applying lipsticks whenever I went over to her place. I started experimenting with maroons, browns and the so-called earthy colours and also found my kind of lipstick - Matte and Earthy. I never wore them to College, except when we had some special function but then I did wear them whenever we hung out together. It felt special - the whole application and how it changed the way I looked and how it made me feel within. I admit it was a bit vain keeping in mind the beauty quotient. But mind you, I did not yet own any lipsticks. Once my friend gifted me a bright red lipstick for my birthday and man, was I thrilled. When I look back, it seems so funny to think that owning a lipstick was something that gave me happiness. Since the pocket-money I received was just about sufficient for my basic needs, a lipstick was a luxury.

Switch to my post-graduation days: I wore lipstick regularly and now I had a reasonable collection of browns and maroons. It was a co-education college and all of us in the M. A. class were seen as mature and independent-thinking men and women and the lipstick became an important part of my identity. I wore it every single day until . . . One of my friends with whom I had started spending a lot of time, asked me out of the blue, "Why do you wear lipstick? Why are you so much given to being artificial?" Man, I was stumped. I did not know what to say because no one had asked something like this to me. I was ashamed and apologetic for being vain and costemised instead of being 'natural and beautiful.' Those were the days of heady idealism and questioning everything and my friend was someone who challenged every norm of the society which was taken for granted. Why was I given to artificiality? Why was I engrossed in decking myself up? My friend also remarked, "My sisters don't wear lipstick. They still look beautiful. Why do you need something extra to make you look beautiful?" That was the last straw. I gave up wearing lipstick and threw away all the lipsticks I had owned at that time. My lips were free of artificiality. Oh! My friend also mentioned how lipsticks were made of lead and fish scales and that it poisoned the human body. I was afraid of dying. The lipsticks were now history.  My friend was happy and I assumed even I was . . . I further started criticising people for applying lipstick and being artificial.

I don't remember exactly when but gradually realised that one dresses up not for anyone else or for the love of showing off but to please one's own self. I guess it was then that I embraced the love of doing something because it gives a smile when I look into the mirror. It was then that I had again started applying lipstick. It made me fee beautiful and confident - ready to take on the day. And this time I had the resources and confidence to buy lipsticks and wear the same everyday. I stopped being bothered by the poison quotient, being artificial or even being called a bourgeois. I guess age and financial independence matters when decisions such as wearing lipsticks should be made. I still get 'those' looks from people who think that wearing lipstick is an undertone for a certain independence, a brashness, a symbol of arrogance and many others. And that is precisely why the film appeals to me because I think the film uses the metaphor of the lipstick to talk about the issues which women face just because they chose to dress up in a certain way -- read as 'going against the fixed and rigid norms of the majority of the patriarchal society.' It is quite startling to think that in spite of living in the 21 C, the lipstick can be seen as a symbol of arrogance and waywardness (only prostitutes wear bright lipsticks and walk around).

The film, I gauge, will also raise questions about the whole notion of dressing up to appeal to our own selves and take control of how and what women would like to portray themselves (dressing, sexuality and others) breaking the delicate shell of the so-called notions of the society. And like many others, I await the film and Konkona Sen Sharma.