When nostalgia gets a tad boring

Posted by S. Susan Deborah at 10:27:00 pm
I often wonder how long can one get nostalgic over and over the same bit that happened some time ago in our lives. Won't the nostalgia stop? Will one nostalgia replace another? Will we stop getting nostalgic after we have exhausted the emotion so much like the cassette that finally wears out due to overuse.

This is a fairly recent happening and I find it pretty amusing. I think about a beautiful memory and find that I keep returning to it every single day and by the time I've thought about it for some time now that I feel tired to think of it anymore. Succeeding that 'boring nostalgia' phase is an aversion to that memory. It is then I realise that overdoing nostalgia also gets boring. But isn't nostalgia something sweet and beautiful. Maybe when it strikes once a while to refresh the bygone years and moments but feelings of longing that strike very often lose their appeal over time. Well, the etymology of nostalgia is from the word, 'nostos' meaning homecoming. Now, I guess that during the time the word was coined, it was meant for someone who was away from home and was longing for home - the physical home and the emotional security that is often associated with the home. But now the word has evolved and comes to mean memory and longing for something that was once part of our lives, not necessarily the home itself. That's what I love about words - they evolve, wrapping in the mood and the times and mould according to the context. They change but still retain their spirit. 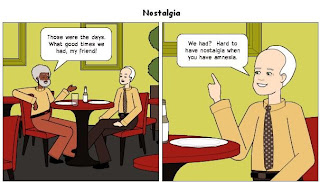 Coming back to nostalgia, I wonder how long will something remain so precious and lovely that each time we are filled with yearning, we feel nostalgia. I guess even nostalgia changes, rather it evolves to something else before going through a few steps: Initially the memory is beautiful and comes to our mind when we yearn for the past. Then we start clinging so much to that specific memory that nostalgia becomes the norm each day. Finally we are done looking at that memory from a trillion angles that we have explored every fine fabric of that particular memory. Then we break forth and no longer relish that memory. The nostalgia of that memory gets boring and we don't feel like returning to that for quite some time. Perhaps after a long time, the cycle will begin again.

Dear reader what do you have to say on this?