Why I stopped reading Ayn Rand

Posted by S. Susan Deborah at 11:31:00 am
Some books change your life . . .
On hindsight you discover that the book has changed you for worse. But while reading the book, one doesn't realise that the change has already begun within unbeknown to you.

After lofty recommendations from friends, teachers and local librarian, I set my hands on my first Ayn Rand book - The Fountainhead. Like everyone who raves and rants about the book, I had my share as well. Howard Roark was the epitome of everything ambitious, passionate and superior grit. I was floating in the cloud of pride that unites Ayn Rand readers, more so Howard Roark admirers. Well, I starved for more of Rand's books - I started reading Atlas Shrugged. Same sentiments followed. I was glued and had the potential of becoming a Rand fanatic - her arguments became mine. She possessed my thinking and gradually the 'I' in me became rather pronounced. 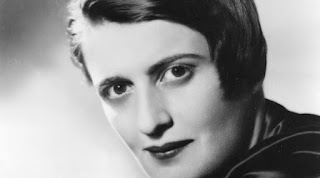 Kira's high form of individualism was appalling. I realise that the self is important but not to the extent of manipulating the lives of others. Tenderness and compassion was something that the characters never showed and if they did display those emotions, it was as a tool to achieve something. I found that sinister and cruel. Perhaps the conditions in my life at that point of time swerved my judgment of Ayn Rand. But that was it. I knew that if I read her further, I would grow to be a cold and heartless woman whose only ambition in life was being superior in reason and self. I stopped reading Rand. And to this day, haven't ventured anywhere near her books.

If Rand read this post, she would have called me a chicken and a pretender but my decision wouldn't have changed.

Now, if you think that this is too much for a book - I would say, 'Don't undermine the power of a book,' for you don't know how it will alter your perceptions and perspectives.

And to all those Ayn Rand lovers and followers, no offense. You are welcome to challenge me in the comments' section. Hope to meet you there.

Have you stopped reading any author simply for the reason that the toxicity was smothering you? I will be glad to hear your stories.