The questions that niggled me after 'Life of Pi'

Posted by S. Susan Deborah at 9:33:00 pm
What is wrong with our culture is that it offers us an inaccurate conception of the self. It depicts the personal self as existing in competition with and in opposition to nature. [We fail to realise that] if we destroy our environment, we are destroying what is in fact our larger self. (Freya Matthew)

Watching the film is one thing and dealing with the questions that the film triggers is another. For me, films are another means to reflect and ponder. Well, I know that films for some, are only entertainment but for me even the entertainment paves way for some critical questions.

Even while reading the book, my mind was filled with an avalanche of questions about the role of man in the circle of life. If I take a minute and scan the media that attacks me from all corners, I can see that the human being is stamped everywhere. That the human is only a part of the web of life is nowhere to be seen or felt. The human being is the most important of all the species and it is his/her existence that matters. Well, these questions make the biopic Life of Pi important for me. This struggle between the human and the wild is what makes the narrative interesting. Couple of years ago, I read (I don't remember where exactly) that if the entire human race was taken out of the planet, nothing would alter but if the species of bees no longer existed, then the whole earth would face dire problems. Well, that is the exalted human for you! 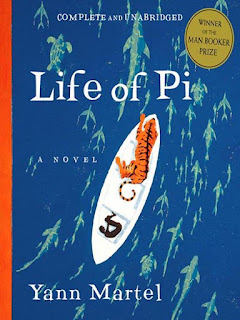 I must mention my area of study - Ecocriticism, here. When I was fortunate enough to be introduced to Ecocriticism, I learnt that humans matter but not to the extent that I had imagined. It was but natural for me to imagine that the whole Universe revolved around the human species. I was sadly mistaken. I had never before thought that there would be another perspective - the other angle of seeing the human as just another specie in the food cycle.

It is for this reason that I cannot dismiss animals as species with 'only' five senses. If man/woman has six senses then that sixth sense is being perpetrated in doing the many things that are widely splashed all over the media today. If that is the sixth sense that we proudly proclaim to have been bestowed with, then I will be happy as a specie with that minus one sense.

With that one extra sense, we are creating havoc, glorifying it and unabashedly advertising it. When Pi's father tells Pi that what we see in the animal's eye is but an expression of ourselves, I thought he was quite true and pragmatic. We always like to see our projection of expression in others and other species. I don't negate that animals have their own sense of perception of relationships and all but at the same time I don't think that I can transfer my subjective feelings as the animal's. When Pi was battling Richard Parker in the vast and open ocean, he was exhibiting his true character - the constant struggle between two different species. It serves us fine to see animals in their cages - tame, placid and exotic but out in the wild, the scenario is a different one. It is these revelations that make the book by Martel a readable one for me. In the film, these aspects weren't captured in their entirety. It couldn't have been for these are questions and thoughts that are complex to be filmed and viewed. Perhaps these issues of realising the self were the questions that were also haunting Martel's mind. 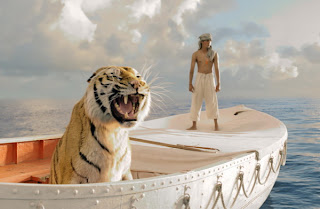 When one realises that one is but a part of the entire system of life, one fails to attach the BIG self-importance to one's self. Wait, now don't get me wrong. I am no way talking about the love that one possesses for oneself! Well, this post was always meandering in my head after viewing the film and here I have tried to give the meanderings thoughts a coherent presentation.

I would like to hear your thoughts on this irrespective of whether you have read/watched Life of Pi.

Maybe I will leave you with this post until Christmas, so here's wishing you and yours a wonderful time of giving, sharing and loving.