Posted by S. Susan Deborah at 6:38:00 pm
This post is a sort of reply to the crass comments, pictures and posts that flooded the social networking sites before and after the wedding of the famous Saif Ali Khan and Kareena Kapoor. Well, I don't care much about celebrities marrying or giving birth to children but the various posts, comments and pictures before and after their wedding prompted me to write this post. 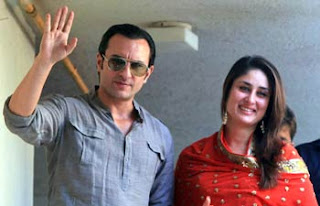 For the ones who are in the dark, this is Mr. Khan's second wedding and there is an age-gap of about ten years between the couple. Many enlightened souls post pictures where Kareena is congratulating Saif on his  first wedding and he responding with a "Thank-you Beta" (beta is child in Hindi). This was quite insensitive as  it pokes fun on the wide age gap between the two. I ask, "So what?" When people can accept that Harrison Ford has married someone who is at least twenty-seven years younger than him, it is difficult to accept that Saif has married someone who is just ten years younger than him. Perhaps, Ford being a Western actor escapes the crude comments and remarks unlike Saif and Kareena who dwell on home turf! Well, don't people know that love is completely oblivious of age and other such meaningless things?

I happened to read a post two days ago, which is supposed to be a humourous take on the couple's wedding but to me it came across as very insensitive and unrefined. I am refraining to provide a link to the post as I don't think it's worthwhile to do so. The writer will not mind me providing a link to that post, but I do mind.

I can quote a dozen celebrities who have wide age gaps between them. I also came across comments on Facebook which admonished Saif for leaving his first wife. But what is your problem, I ask? I know that divorce is still a taboo in India but that does not make all divorcees 'bad.' The personal lives of celebrities have become knitted along with the non-celebrities' lives and hence as a community we become the moral police of their lives. Who are we to comment on them? Okay, I agree that gossip is a juicy fruit and not many can avoid it but to the extent of posting distasteful pictures and comments. No.

In fact, Saif has done something what our parents' generation has done -- marrying someone who is much younger. My mom and dad have a thirteen year age gap! I find that strange to think as I wonder how they related to one another. My friend says that her parents have an age gap of fifteen years. They got along well and my friend's father did not call his young wife 'child' or anything like that. If men were much older than the women they married, then it belongs to a custom which is commonplace in India (and also outside India), then why such hue and cry about Saif and Kareena!

All said and done, I wish them all the best with years of joy, togetherness and contentment.

So, do you think that age and love are connected?