When the graduates protested

Posted by S. Susan Deborah at 8:35:00 pm
Yesterday I was at one of the oldest Universitys of the country, University of Madras, to attend a convocation. The governor, Dr. K. Rosaiah was there and the guest of honour was the UGC chairman, Prof. Ved Prakash. Normally in a convocation the degree certificates are given and then we come back home. But this time there was some extra zing to the whole affair. There was a fight and a resolution along with a promise.

First, it was announced that only one student from each department would come to the dais and receive the doctorate degree, as the programme had to wind up within an hour. For some time there was no much flutter and then it came. A PhD graduate who had come to receive his doctorate protested that he didn't want the degree just handed to him. He wanted to receive it from the governor. His point was valid. One comes from afar off to only find that the degree would be handed over to him not on the dais but where he is seated, will definitely cause irritation. When that man rose in protest, many graduates joined him and protested the plan. But through all this, there were many graduates who were just seated. For them it did not make any difference. If I was there in their place, it wouldn't have mattered to me. For me, my degree would matter and not whom or where I got it from. 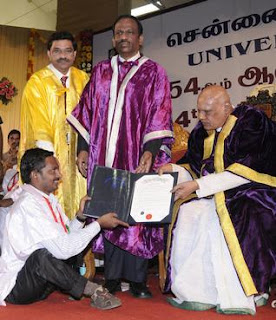 In the picture L to R: Registrar and Controller of Examinations (in yellow) Dr. Leo. T. Alexander, Vice-chancellor (in purple) Col. Prof. G. Thiruvasagam,  Governor and Chancellor of the University (seated) Dr. K. Rosaiah and a graduate receiving his PhD degree.

The Vice-chancellor and Registrar came into the picture. They pleaded with the graduates to return to their seats. Their plea fell on deaf ears. Phone calls were made and there was visible tension in the eyes of many officials. Finally the VC announced: All of you will receive your degrees from the governor. There was an applause and peace had descended on the faces of the protesting PhD graduates.

Seeing all this, I wondered that many times we are quite content with whatever is thrust upon us. Sometimes it is assumed that people will accept whatever is doled out to them quite willingly. Even in the convocation, if one man hadn't started that protest, none of them would have. This goes for everything. I think of Auden's poem, The Unknown Citizen. A citizen who is quite invisible and does not have his/her individual voice. How many years we have been so and will continue to be so, I imagine. And, having said all this, even I am like that citizen who accepts and conforms. After all, life goes on.