Posted by S. Susan Deborah at 1:39:00 pm
When I last did a post on a Japanese film, a reader, A. J. Poliquit commented: "Films from the Far East are slow and calming with memorable music." Having AJ's comment in mind and the backdrop of the movies that I have already watched, I sat down to watch the Korean film, Oldboy. The film was definitely slow (in the beginning) but not calming.

The protagonist is locked up in a cell for 15 years, without knowing why he is locked up. I had tremendous difficulty in following those parts as I was completely oblivious to what was going on with him. It almost seemed that along with the protagonist, even I was perplexed and confused. The film's narrative was also a bit confusing as it went back and forth between what happened before, during and after the 15 years of imprisonment. In fact, one had to pause, go ahead and then resume the movie, in order to understand the narrative scheme and the plot. Movies like this one, though keep me glued, exasperate me. 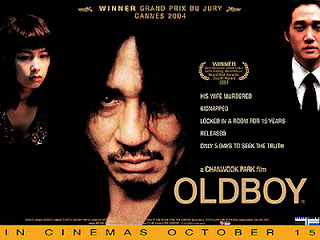 It is after some time that one realises that the imprisonment is an act of revenge for something that happened in the past involving the protagonist and two other individuals who were students of the same school. When I came to this part, I understood the title of the film (Ahhhhhhhhhhh. A long sigh). It is after this part that the movie gets exciting. What's next? What's next?

Then the story rapidly moves forward with shots of the past cradling the present. A tale of incest is revealed. After sitting through all this, one is left wondering about the different nuances of life, relationship, crime and emotions. The film is definitely a thriller and it thrills you in different ways sometimes leaving you with a bitter taste.

The film has some distasteful scenes. Let me mention two. In one scene, the protagonist eats a live octopus and in another he chops off his own tongue.

This film from the Eastern world shook my sensibilities and I am short of words when it comes to praising the craft of the director, Park Chan-wook.

Watch the film if you can digest incest, imprisonment and revenge sprinkled with some gory scenes.

So, what kind of films do you like watching? Will you watch Oldboy, if given a chance?