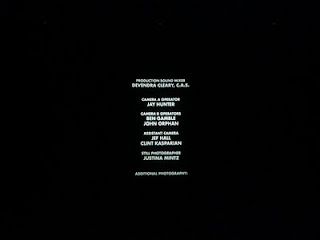 Maybe I have a peculiar affiliation to the movies. I like watching the beginning of the film and the credits rolling. That does not mean that the movie holds less fascination. No. I just cannot get up when the credits roll and this causes a lot of annoyance for people who sit in my row when I happen to go to the movie-house.

The feel of the credits rolling gives me a special thrill. I wait for that sound track which is saved for the last bit. I also like to catch the various names of the different people who have contributed to the film. And if its a foreign film (English included), there are several people whose names are either Susan or Deborah and that gives me a special joy. A child-like happiness to see my name. No strings attached. Sometimes I strain my eyes (many a times the credits are so very tiny) to see the lead character's name if I do not happen to know them. Well, I could definitely google the name but then why do that when I can find out when the credits roll.

Now for the spectacular beginning: I especially adore the 20th Century Fox, Columbia Tristar openings. The whole beginning gives me goose-bumps and I am at the edge of my seat with wonder. And it happens everytime the film opens. The tune, the logo - everything is the opening of a dream for me.

The credits sometimes has 'behind-the-scenes' which are quite funny and hilarious. They enable one to savour some of the happenings on the set which make us to view the real people behind the characters.

The willing-suspension-of-disbelief is incomplete for me without the beginning and the credits rolling. Are you a bit insane like me while watching films.
Labels: credits rolling, Film
Email ThisBlogThis!Share to TwitterShare to FacebookShare to Pinterest