Suriya's recent film, Soorarai Pottru goes beyond the trope of a hard-working middle-class individual fulfilling his dreams with sweat and toil - it is reminiscent of the existing gap between the rich and the middle-class. The antagonist Paresh who derides the common man sitting next to the likes of him and flying is a stark reflection how 'certain' facilities are seen as available only for an exclusive percentage of people. Liberalisation and consumer driven economy slowly started diminishing the exclusivity of the upper class people. The rising ability of the middle class to spend money on brands and other durables started dissolving the divide thereby causing the upper class sections to reach out for products that were more exclusive than the existing ones. Many middle-class people who were slightly better off than those in the same class started feeling the brunt of affordability of prized brands such as Fabindia, film festivals such as IFFI and many other such events which was considered the space for only a 'certain' kind of crowd. 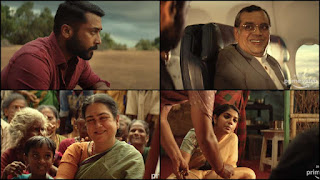 Captain Gopinath's victory ushered in that space which was usually considered as the privilege of a select few. Paresh's disdain of the common man with his sweat, grime and low status is actually a reflection of many middle-class sections who are able to afford many durables which was hitherto unavailable to their parents and forefathers. When the grapes which were now attainable were no longer sour, the same availability to certain others causes a sourness of the mind.

The mind is powerful to ascertain the status of people based on their appearance, language and habits. It is the same mentality which considers knowledge of English as superior and a certain background. Talking in the native tongue is most often looked upon with a frown and displeasure. Similarly a well dressed person is treated with respect in the clothes/jewelley/shoes showrooms which reflects on the person who is meting out this treatment. But it mustn't be  forgotten that the person who is an employee in that particular showroom might come from a similar background of those who he is 'taught' to despise and show disdain.

How do these judgments come into being? The disposable income? The high paying job which is a part and parcel of many pay commissions? The value attached to superior brands which has been given power by the buyers?

This is where Marxism and Socialism comes into play. These theories might have been a failure but one needs to be aware of the ideologies. Today, Marxism is an ideology which has to be applied to diverse situations and people. As long as the ideology is capitalist, people like Paresh would go to any lengths to avoid being seen in the vicinity of the so called aspiring middle-class people. And to challenge that, we need Captain Gopinaths around, forgetting that he might or might not be a socialist by ideology.