Of pre-adolescent gods and demi-gods!

Posted by S. Susan Deborah at 12:21:00 pm
Growing up, I used to collect posters/pictures of actors, Aamir Khan and Madhuri Dixit obsessively. I had claimed that I liked them and had a diverse assortment of pictures (sourced and cut from popular magazines, Filmfare and Women's Era, among some) of the two which had multiple poses/expressions and clothing. Thinking of those times in the present make me seem a tad foolish because a) I had never watched any film of the two, b) I could not claim why I had liked them enough to collect many pictures and c) I was/am not a fan material. No one had the courtesy to even ask me why I had gone on a steadfast mission of collecting the pictures except my mom who believed that idolising anyone except Jesus was a crime!

Well, I collected and proclaimed my love for them. Their films were released and I did not know much about them because we did not have a TV. My only knowledge of these actors were their songs which I heard while passing by the tea-shops which blared their latest top hits and my friends who had the fortune of watching TV and creating envy in the mind of the naive little girl who believed that TV was the gift reserved for only some lucky households.

My love for stars and celebrities extended to cricketers as well - Kapil Dev! I vaguely remember the wild winning of the World Cup in 1983 - I was 3 and we had no TV but I remember maybe because of the adults (my father, uncle, neighbour) discussing the matches or my father reading aloud from the newspaper - The Times of India (when it was still worth its salt and not reduced to TOIlet!). I had also developed a fondness for Vivian Richards, the charming West Indies erstwhile captain! I had followed the lives of these celebrities who I had liked and got to know of the various dalliances - all through people who discussed them! 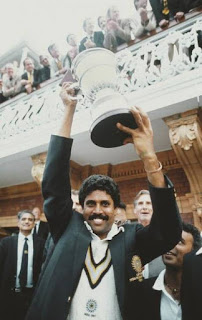 Today when I think back, I wonder how this all could come about - Kapil Dev had huge bunny teeth and had a horrible voice - the Palmolive ka jawab nahi! effect. Then the Television entered our lives. The enchantment with these celebrities started to wane. I started discarding the picture-cuttings of Aamir Khan and Madhuri Dixit. I had grown past the pictures and started watching their films. I liked some and disliked many but never let go of the fact that I liked Aamir Khan; Madhuri had completely worn off my mind and whenever I see Kapil Dev and Vivian Richards, I cannot stop myself from exclaiming, "I used to like them. They were my favourites."

Today, while reading The Hindu's sports column, the toothy smile of Kapil Dev and him jubliantly holding the 1983 World Cup made me travel to the time when I was a three-year old who liked Kapil Dev and wanted to meet him some day!