Posted by S. Susan Deborah at 10:38:00 am
Believe me, I was never someone who took exceptional care of grammar esp the apostrophe when I was jotting down in my wee journal or writing in my blog earlier. My its and yours followed their own mind and often my number and tense was havoc! I wonder how those changed. Did I become conscious after reading a few writing blogs or did Facebook's self-proclaimed grammar nazis trigger the urge to check and recheck my its and it's. No, no, it wasn't Facebook. I now remember. It was my Supervisor who drilled and coerced me in turns to refine my crude ways of writing. The rest was done by the writing blogs that I had (wisely) subscribed to while gallivanting the world of blogs and bloggers. But even then, I wasn't a grammar nazi. I was a learner who was relearning and unlearning few tricks of the trade. 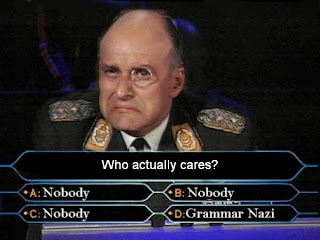 In case, I forget, I was also teaching. And while one imparts knowledge, one should be sure and right of certain things atleast, I reckon. I might not be the teacher who gets everything right but my students had to learn some fundamentals of the English language and there it became imperative that I train them in certain rules of the language and writing was one of them. I consciously started spelling out your and you're; its and it's, in my mind and double-checked whenever I wrote something on the board. Of course, writing in English is more than their and there but still these were some items which were always confusing and largely misspelt. Gradually, my writing started improving. When one's Supervisor drills plus one teaches plus one reads fantastic writing blogs plus one writes often, the end result is something good. Ah, how I did I forget to add voracious reading to the list. That too helped a lot.  And all the while, I was STILL not a grammar nazi.

Then Facebook started popping up these pictures and memes and all of a sudden, there was a gross turnover of self-proclaimed grammar nazis. Sadly, even I joined the tribe, I reckon. A was correcting status messages, S was lamenting the fact that poorly-written blogs are getting popular, D was posting grammar memes on her wall and finally here we are - A group of grammar nazis screaming loud and ranting out the fact that grammar is dying a slow but sure death. And there were few who even challenged the fact by replying 'k' and 'u' and other funny answers in response to the grammar nazi's frustrated pleas. 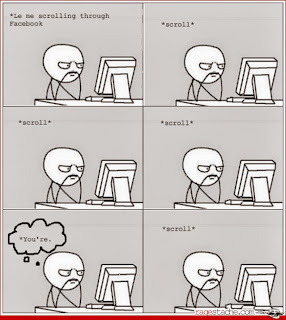 Facebook and blogging, along with showcasing our penchant for imagination and narrating events, also brings to light the habitual grammatical skirmishes which are often unknown to the writer him/herself thus giving a field day to the grammar nazis. And why is it that the grammar nazi is only passionate about its and it's and your and you're. Is that all that is there to grammar? Grammar is much more than misspelt words! No memes point out to awkward phrasing of words, tautological errors, long sentences, non sequitur lines and so on. There is much more than what meets the eye. But grammar nazis don't venture beyond a point. Why? Simple. No one understands the errors and thus begins the great argument - English is not my mother-tongue. If English is not your mother-tongue then why do you attempt to write in an alien language! Well, I can go on and on with this but I shall pause.

So, the conclusion: Without poor writers, a grammar nazi cannot exist. I still feel that I am not as competent a weaver of words as certain others are but I certainly take care of my you're and your when I write. This ensures that I am safe from the grammar nazi within and outside of me!

So, what say reader? Are you one of us or them?

An update: It takes one to spot one and one of my favourite reader/commenter Govind pointed out a glaring error in the post. I thank him for being a discerning and sharp reader. Salute boss!
Labels: blog posts, blogging, Facebook, grammar nazi, love of words, teachers, teachers of English, writing
Email ThisBlogThis!Share to TwitterShare to FacebookShare to Pinterest