Posted by S. Susan Deborah at 7:47:00 pm
Now I know how wrong I was to judge Amy Winehouse's music by looking at her personhood. I had always associated her music to be dark, meaningless and that of just another dope singer on the block. Looking at her bee-hive hairstyle and rehab stories, I couldn't make myself think that she could produce good music. All the while, I had made these judgments without having listened to her music. The smallness of my personhood comes through examples as these. 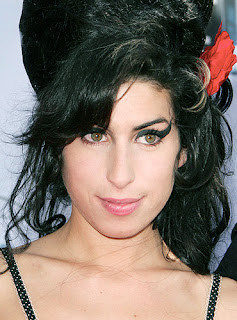 After her untimely death, there were many reviews which chose to focus only on the '27 Club' and not her soulful music or her voice. But there was one review which piqued my interest towards Winehouse. I read that obituary quite carefully and the writer, though mentioned the 27 Club, did not choose to make that his sole point of reference to Winehouse. The way he described her voice and range, could have forced anyone to go and listen to her albums. I don't know whether others did that but I precisely did that: listening to different songs by Winehouse. I started with Rehab, which faintly reminded me of CCR's "Someone told me long ago/There's a calm before the storm,/I know" from the song Have you ever seen the rain?. I liked the feel of Winehouse's Rehab. I listened to all of her songs that were on You tube and boy, here was a fan of Winehouse's voice.

Well, I don't much listen to songs by girls/women, as they are mostly mushy love songs with a voice that drips honey and sweetness. Of course, there are some exceptions to this and Winehouse was one who did not have a stereotypical voice (wiki tells me that she possesses deep contralto vocals). Now I feel sorry that the world lost someone as her at so young a age. If she was alive, there would have been many soulful songs that would fill the idle hours of many souls like me.

I should leave this judging business, otherwise I will lose out on many things. What say?